Spurred on by our chilly weather, I finished up my Bedford sweater at long last. 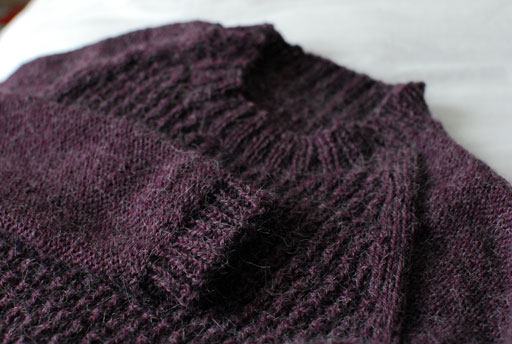 Such is today’s gloom, modelled photos are unfortunately out of the question 🙁 I can’t really complain though as I know other parts of the country have seen torrential rain whereas we have only had clouds. Grey, suffocating clouds but dry ones nonetheless.

I was pottering about with the camera when I realised that I had never shown this shawl properly. I don’t really remember when I knit this, though it must have been after Christmas. I knit a cream version for my teacher and liked it so much that I made one for myself afterwards. 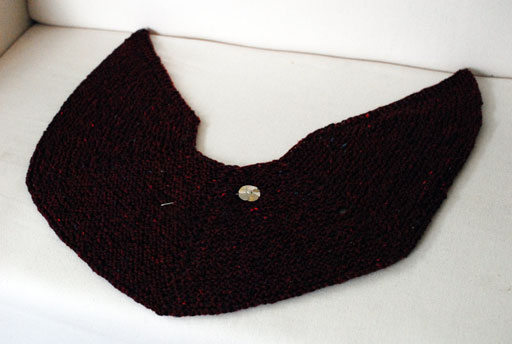 I used 1 skein of the delicious Studio Donegal Soft Merino (which you can peruse here) and something like 4.5mm needles. They were a bit small. I think 5.5mm would have resulted in a loftier fabric and a bigger shawl. That said, I love it dearly, wear it often and have another skein in the light blue for another on the bigger needles. You might spy the silver shawl pin there – it was a souvenir from Cafayate in Argentina, locally made by a lady silversmith. It was about €10. We were very picky about what we bought to put in our suitcases as we were travelling for nearly 5 weeks but this, I regret not one jot. Every time I use it, I think of the woman who made it, of our wonderful holiday and am reminded that here, we have absolutely no concept of what the middle of nowhere is.

What else? Oh, I really wanted to try out the Jamieson and Smith Jumper Weight yarn that This is Knit has started carrying so I knit up a beret using my own pattern (Beret Easy… I’m feeling a bit old right now). Quick and easy, it was perfect for watching basketball during the week. All that remains is for the inner band to be sewn down. 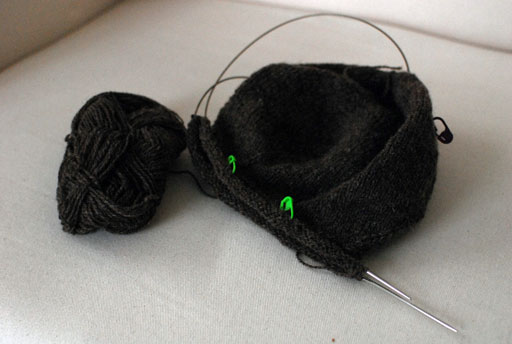 It’s a very nice yarn. A bit scratchy perhaps but I expect it will soften up a lot when I wash it. It is lovely and sticky, making it perfect for colourwork. Have you seen Kate Davies’ Sheep Carousel yet? I believe the digital pattern will go for sale in a few days. This is the point where I think we abandon all other notions and cast on for it immediately!

I should probably explain why I haven’t been knitting in the last year or so – I have had tension problems with my left arm and shoulder. I am pretty much cured for now, which explains the recent surge in production! It was a combination of a number of things, such as sitting more for teaching, being stressed and playing a LOT from February to April. I had a number of days where I was sitting and playing for more than five hours (for competitions or rehearsals). Days where I sight-read a lot tend to leave me very stiff. Anyway, I started taking more breaks, stretching more, doing some yoga and just stopped working so much, and it’s healed by itself. I knit and spun very little because it aggravated it a lot: I am happy to be back to my old self. I really missed it and oddly, found myself not wanting to be interested because I wasn’t able to pursue it. Sewing is great but really, it’s not knitting!

Speaking of which – you may have already heard about the big debacle concerning the Ravelympics? (If you don’t know about the Ravelympics, it’s basically a big worldwide knit/crochet/spin-a-long to the Olympics, with most communication going through Ravelry) Well, the commission for the US sent a cease and desist letter to Ravelry because the Ravelympics use the Olympics brand or logo or something. I don’t think they do exactly, but it’s enough to cause rancour. Not just that – by running such a harmless event, we are disrespecting what it stands for and the athletes that participate. I’m sure you can find out all the details on Ravelry. Whilst they probably do have some sort of legal point, I don’t really understand their point generally. It’s free, it doesn’t generate profit… mostly, it just stinks of one group of people saying, this other minor, insignificant group of hobbyists is not taking this seriously enough! they’re having FUN! you can’t have FUN at the Olympics! Also, isn’t the whole point of the Olympics to be inclusive, international and for-the-fun-of-participation?

Well, whatever the outcome, I’ll be knitting along to the Olympics like I always do. I haven’t joined a team yet but I think I will participate in two events regardless: the frogging trampoline and the sweater triathlon. I’m going to rip out my Pole sweater and the sweater I want to knit is Amy Christoffer’s Larch cardigan. I have the yarn, I want the cardigan, I have marathons that need watching. And those races where they’re not outside the stadium but they go round and round and eventually they ring a bell and they all run faster? I love those. Regarding the Pole, I love it and adored knitting it, but I never wear it. I think it will live a happier life reincarnated as Heidi Kirrmaier’s Nanook.

I will probably get sucked into the Sock Put and quite possibly the Hat Dash – and the Mitten Medley is far too tempting! What will I do! A month is not nearly long enough to decide!

PS: Have also been sewing but too dark for modelled photos – the Lisette Market skirt (here), yet another pair of shorts but longer this time (here) and working on an Amy Butler top and a pencil skirt for my mum (here). I have been practising, too, I swear – there’s always time for the fun stuff.

0 thoughts on “Mostly about knitting”