I started it last night and I haven’t been able to put it down. 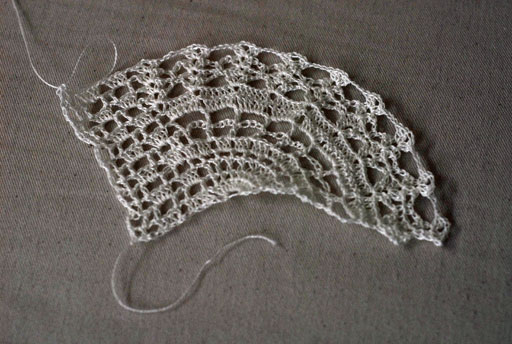 When I got the yarn – the DMC Perla ‘8’ I was telling you about – I thought, oh no, it’s like thread. Don’t get me wrong, I was expecting it but it still seemed awfully thin. And the hook? Practically invisible. 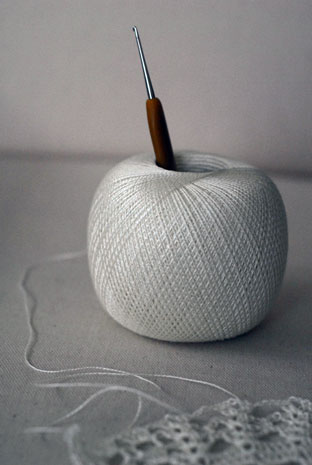 But once I got going, each of those teeny-tiny chains built up so quickly that I had to keep going. When you see it worked up, the yarn doesn’t even seem so thin anymore. Speaking of the yarn, it’s the exact same consistency as the Perla ‘3’ even though it’s thinner. It has the same subtle sheen but isn’t slippery. The next favouritest* thing about this project is the hook. 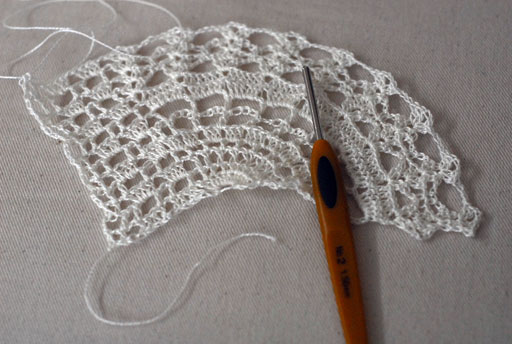 The really tiny Clover soft touch hooks come with a metal hood to pop on when it’s not in use so that it doesn’t tear up all and sundry in your project bag. Very cool.

*In the job I started in February, I inherited a class of young kids, between 6-8, who regularly rank their ‘favouritest’ things for me. This is usually part of their ‘can I tell you something’ section of the lesson. Yesterday, I debated with a 6 year old girl why the semibreve was her favourite note. I said, what about the dotted minim, with her beauty spot and three beats? (We had just learned about it) She said, well, she’s my next favouritest. Cute, but doesn’t come close to a normally taciturn 7 year old boy I have who, a few weeks ago, suddenly felt compelled to tell me about how they have an electric keyboard that lights up when you play it and then the cat got sick and then it threw up on the keyboard and now it doesn’t light up anymore and it smells funny.

Have a great weekend!

One thought on “Hook, line and… scarf”