It is a very dismal day here today. January is out to show us what it’s about. Well, to take your mind off it, I have a few things to show over the next couple of days – projects I had finished or very nearly finished right before I went home for Christmas. The first is my pleated skirt.

Pattern: My own, drafted in a class I took a few years ago. Lost some weight in the meantime so it’s a bit big on me. Bearing in mind that I’ll have at least two layers plus a pair of tights tucked in on a day that warrants a skirt like this, I think it being a bit roomy isn’t a bad thing.

Fabric: Leftover wool-cashmere herringbone and line with navy satin, both leftover from a dress I made two years ago (and never properly blogged about, oops!). Both bought at Murphy Sheehy’s.

A note about this fabric. At the time I think I paid about €70 for the lot (eeek, I know). The herringbone was the end of a bolt so I got maybe 3m for the price of 2 and a bit. In hindsight, I’m glad of it because not only will I have gotten a dress, a skirt (above) and a matching top (out of the leftover satin, planned in detail, next up to sew) – with enough herringbone left over to make a matching beret, I will have had the immense pleasure of working with such fine quality fabric. In short, I think I’ve gotten my value for money.

The zipper could have been a bit better – but also a lot worse. For my second or third ever zip in a garment, I can live with it. 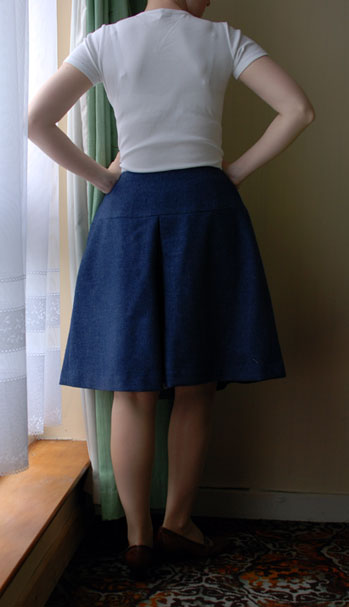 I sat down immediately after pressing it, in case you think I am a bad ironer! The back, clearly, has the same design as the front, which makes it very swingy. The weight of it, though, means that it doesn’t really get blown about.

This is my favourite bit but it had to come about through an error on my part, unfortunately. I have no idea what I was doing. The lining was very long, too long to turn up a hem, so I decided to trim it. I just got my scissors and lopped off a big chunk – without lying it out flat, checking lengths, nothing. I was left with a slightly-too-short lining, and that was before I turned my hem. (I should probably add that this was before Christmas when I was waltzing in the dangerous territory of cutting things when I was tired. I don’t think I should be allowed the Big Scissors after dark). I didn’t know what to do so I mulled about it over Christmas.

When I returned, I took two metres of lace that I had bought for something else. In the course of my mulling, I realised that two metres was not going to be enough for what I originally intended it for and could be used for this, instead. It worked a treat. First, I pinned my hem as evenly as I could. Then, I pinned on the trim. I marked and joined the trim at a seamline the way the Sorbetto pattern has you join bias binding. Then, I tacked the whole thing and then sewed it with navy thread for the hem and a white bobbin for the lace. The hem on the inside is still a bit wibbly in places but considering my situation, I’m happy it looks ok.