I am in love with mitered corners. Yet another simple technique from 1, 2, 3, Sew. 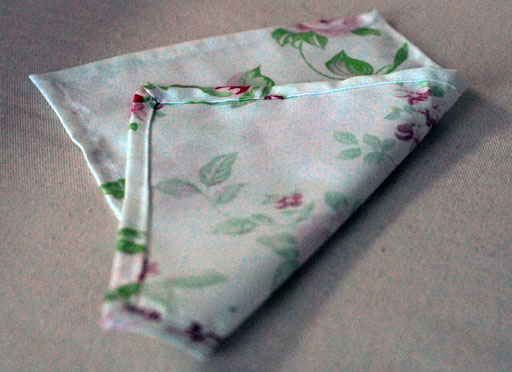 I had two small squares left over in this fabric but I ruined the first one by making four 65-degree corners. This, on the other hand, is most pleasing. I acquired some fat quarters and am sewing a simple present using this technique. Perfect for those days when you want to make something but don’t really want to think too hard (which was yesterday).

I got a pile of navy Karisma from the Constant Knitter yesterday in the post and cast on immediately for my Dad’s Christmas jumper. He has worn the first one to death. The second was much loved but went missing in the hospital. If someone had the nerve to steal it – well, I hope they’re too warm. The following months can only be described as a mourning period and whether he’ll admit it or not, I know he wants a jumper for Christmas. 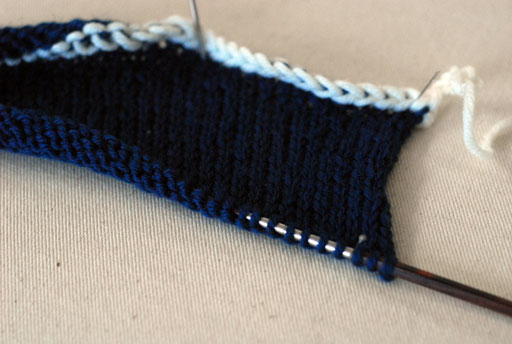 On the upside, I have all my notes from the last one so casting on was simply a matter of making a swatch and jotting down a few preliminary sums. I have a month to the day for this one so time is of the vanilla essence.

I finally pushed on with my top pattern yesterday evening. I move slower than if I were taking a class because sometimes, I feel like I’m reinventing the wheel a little bit. I get stuck and have to think about things, look back over my old notes and try to figure it out for myself. Which, though slow, is probably better in the long run. 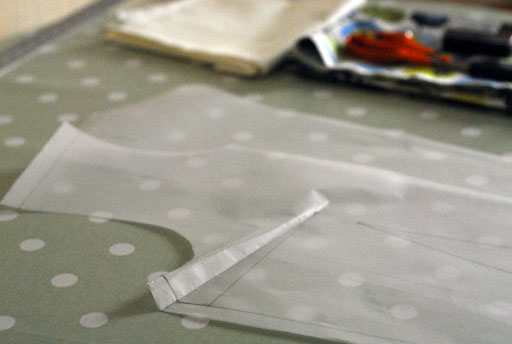 This isn’t going to be perfect. I think the armscye and waist shaping will be ok but the neckline, I’m not so sure about. Hoping to test on muslin tomorrow.

Thank you all for weighing in on the skirt issue! I didn’t realise so many people didn’t like school uniform skirts. My mum used to dress me in a kilt, when I was quite small, that was straight across the front and pleated around the back. I suppose I had that idea in the recesses of my mind. In the end, it was Mary L’s comment that the very pleated one would be impractical for cycling that swayed me! However, with the more A-line skirt, I’m not sure how well the bulk of three pleats would sit. It would be pretty heavy. I have subsequently come across this version which I think is a nice compromise and satisfies that bit of nostalgia, too. The more I think about it, I like the idea of a straight cross-over front with the movement of the pleats around the back. I get to keep the traditional elements of the buckles and the kilt pin. And, as you can see in the link above, the pleats in the back are tapered down from the waist band a fair bit so there’s a nice tidy shape without the extra hassle of a yoke.

So I’m going to sew the top first and then start the skirt. Exciting!

One thought on “Simple beginnings”