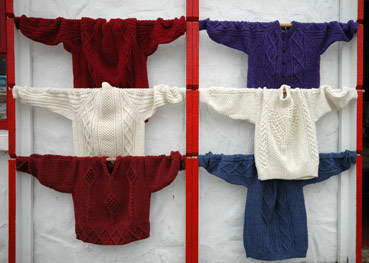 Just hanging out on Inis Mór 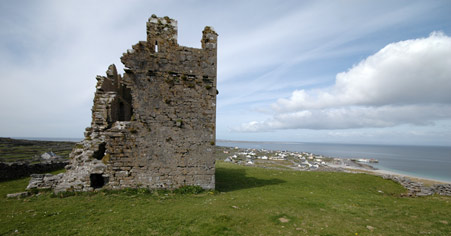 As I said in my last post, we arrived on Inis Oírr on Good Friday. This was taken from the highest point on the island. The old ruin you see was a lookout tower. To the right of the tower in the background is the harbour, and you can see Inis Meáinn in the distance. 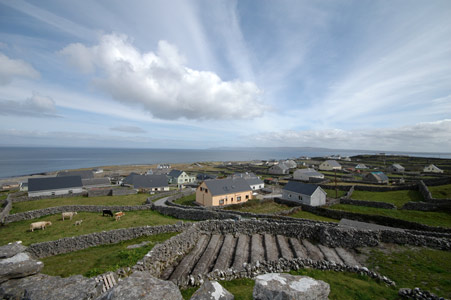 As you can see, the island is well-populated, with approximately 300 permanent residents. You can’t see it very well in this picture, but to the left is the airstrip. You can get an air-taxi from Spiddal or Galway. On Good Friday, planes were landing every fifteen minutes or so. Most of them were little two- or four-seater planes. There were about four or five men working down at the airstrip. Beside the runway is a fire station. Alb and I were wondering how the islanders get their fuel, and how they get vehicles out to the island, because there was definitely no room on the passenger ferry. We asked Bríd Póill, who runs the B&B, about it. She said that vehicles are brought over on a bigger supply ferry, and to bring a car over costs about e80. All vehicles on the island run on diesel, and they buy it from the tanks down by the fire station. The supply ferry comes every day during the summer, and three times a week during the winter. We were asking Bríd how she did her shopping, as there is only a small shop on the island. She said she had an account with the supermarket on Inis Mór; she rings them up, they send it on the ferry, and she has it by the next day. I’m sure it works perfectly during the summer, but I imagine that during the winter, in bad weather, you’d want to have some provisions. 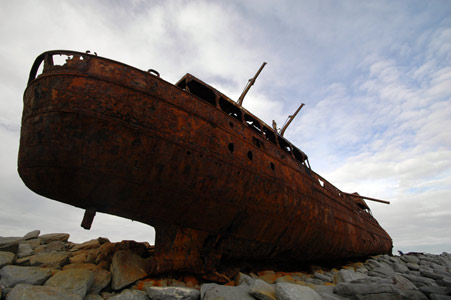 This is the wreck of the Plassey which ran ashore in bad weather during the ’60s. The islanders rescued the entire crew. Bríd Póill has a collage of photos taken during the rescue. The sea was frighteningly high, and the crew was pulled ashore with ropes. You can see what the ship looked like; it has been badly corroded since. It was washed further inland in another storm since, so you can actually walk around it. 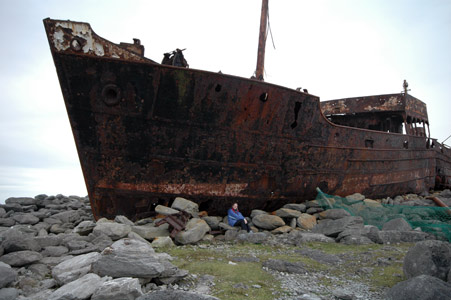 See me in the blue coat? This will give you an idea of how enormous it is. Since we last visited the wreck, one of the masts has fallen off and all the graffiti has been corroded off. 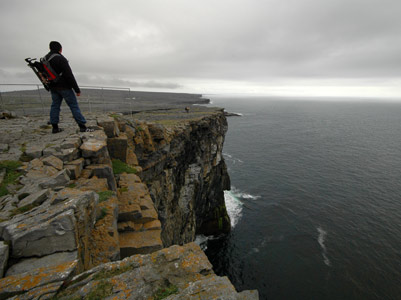 This was taken from Dún Aengus on Inis Mór. It is a cliff fort built millennia ago. I say millennia because half of the fort has been eroded away! There are about 900 permanent residents on Inis Mór. In the 1900s, there were close to 2,500 people on the island. They were encouraged to clear the land of stone and build the stone walls for which the islands are famous. There is about 7, 000 miles of stone wall on Inis Mór alone. They are used as boundary walls because the land is divided up evenly among the farmers so that nobody gets all the bad land or all the good land. There is a priest resident on Inis Mór, and he makes flying visits to the other islands during the week. The last priest there learned to fly and had his own two-seater plane. There are three primary schools on the island and a technical school too.

I was expecting a quiet week, but things have turned out to be pretty crazy. I keep hoping that things will quieten down a bit but until I get my chamber music exams over and my end-of-year sorted (long story), I can’t see it happening for a while!