Things have been busy: I got a job! I am now a part-time music lecturer and accompanist, for this semester anyway. I have three hours of lectures and three hours of coaching. The coaching is kein Problem. The lectures… well. I had a week’s notice and a very vague outline of what I was supposed to cover in the term. Luckily, I have some friends who lent me some materials and after a few days of panic/photocopying, I had something to start off with. I think it’s going to be fine. I’m only in until Easter, after which I play for everyone’s exams and then I’m done. So these days it’s very much a case of making hay while the sun shines.

And, of course, it never rains but it pours: I have two recitals in February, competitions in March, two recitals in April, exams in both Maynooth university and the IT where I’m working in May. Of course, I have my own recital exam, thesis, wedding and errr, I’m trying to put together a concert series with my friends from college for June. Don’t worry, it will all be fine. Here, soothe your soul with some knitting. 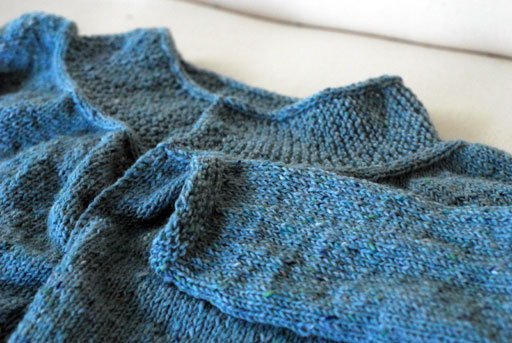 This is a very bedraggled-looking Harvest Moon. I am trying to knit my way through the various stratae of my stash. This is very old yarn (oh God, 2006!). I tried to turn it into a jumper but all I ended up with was one of those Frankenstein moments. I denied its very existence. 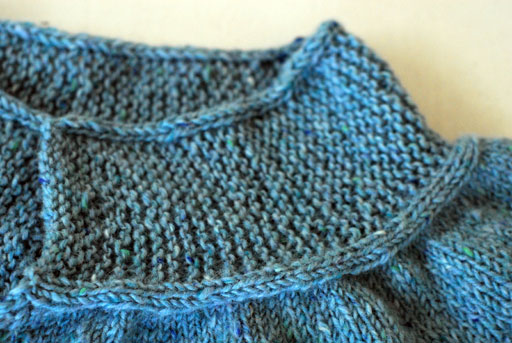 I think this reincarnation is much better. I love the collar: you work a stockinette edge on one side and it makes the curve all by itself. Then you just pick up all along that edge and continue on in the round for the yoke. I had reservations about picking up along the collar because I don’t know about you but I always find it nigh on impossible to get the number specified in the pattern. With this you couldn’t go wrong; it was simply pick one stitch for each row. 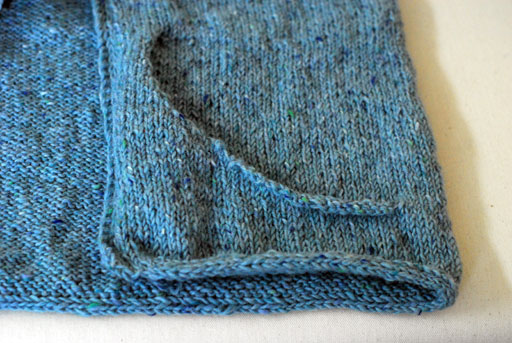 The pockets were a good bit of knitting but I think they’ll be worth it. Check out the hem there. It’s a 4-stitch i-cord cast-off. I’m still not sure about it. I know it’s lying flat in the picture but when I pick it up, it rolls up at the back. I think I might take it out and put in a garter edging instead. I did it with the first cuff and I think I prefer it.

I really needed some mindless knitting the other night – I had some very long days last week – so I cast on for a Hap Blanket. This was entirely thanks to She Knit Up That Ball, who cast on for one in a flurry and sucked me in while she was at it. Again, this stuff is deep stash from our 2007 trip to Donegal. I had such a good time there I couldn’t bring myself to knit it up. 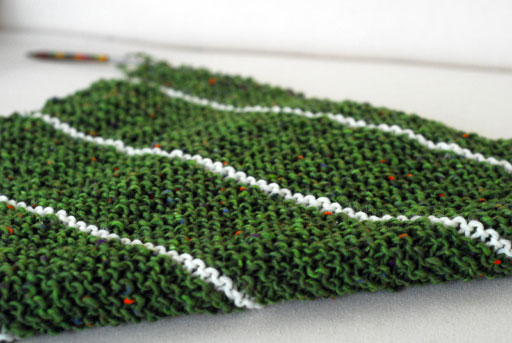 The cream is leftover Tivoli Celtic Aran superwash and the whole thing is surprisingly soft. I know it looks a bit small but there’s a gigantic border to go around it. It is fantastically soothing.

I have been chipping away at my Ishbel shawl and it is growing exponentially. 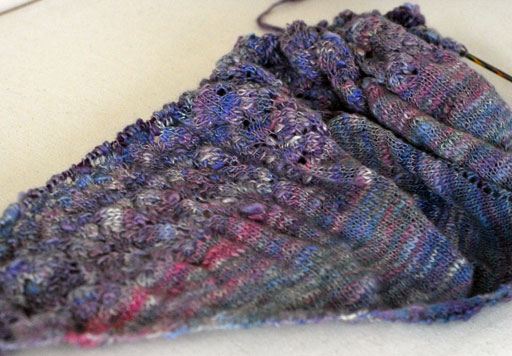 …and for some reason, the urge overcame me to dig out a very old WIP. A crocheted bathmat. Very easy but there are a lot of ends. 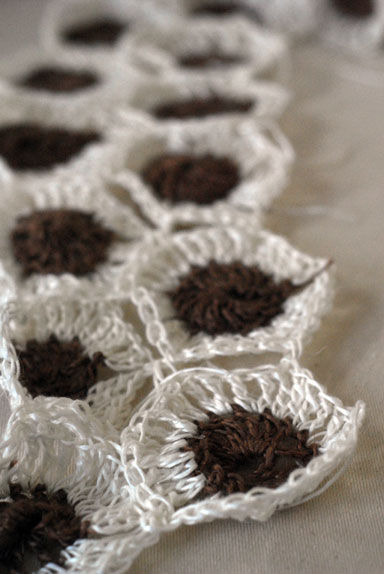 Last week was really very trying. Between two half days of lectures, I had six extra hours of vocal coaching because I filled in for a singing teacher that was sick. With all the stash knitting I’ve been doing, I thought I deserved something special for a change… and what could possibly be more special than something from Hedgehog Fibres in Cork. Beware: therein lies a rabbit hole of the yarn equivalent of chocolate cake.

I got some Wenslydale roving for a hat… 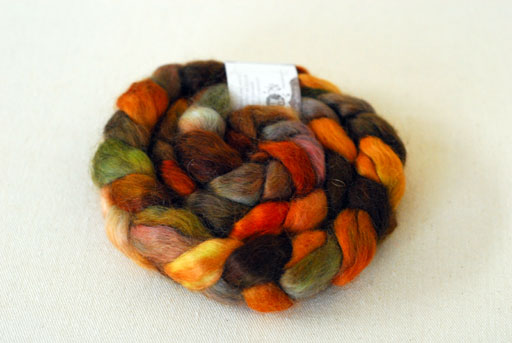 …and some mixed fibre batts – mostly merino and alpaca I think – which I think will make a nice, simple, garter moebius. 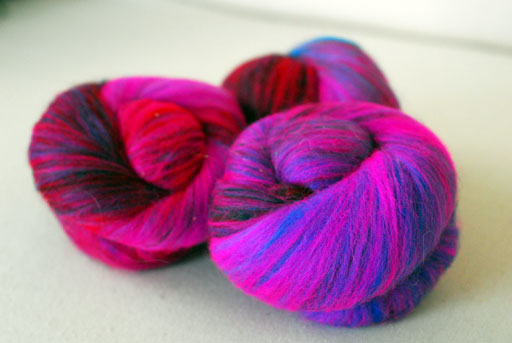 Sincerely hoping that this week will be more straight forward and I get some time with Margot (my wheel).

6 thoughts on “Many fingers, many pies”