what i thought would be an ordinary weekend turned into a great weekend. i took it easy, ate good home cooking, and got some work done too. i went to sligo with my mum on saturday and i got the greatest pair of shoes ever made. i got some other things too, but on my travels, i went in to a wood carver just off o’connell street, called michael quirke. he used to be a butcher, and used to do carving in the shop to keep himself busy. when more people came in to look at his carvings than buy meat, he turned to carving full time. he specialises in irish legend and folklore, and sligo landscape. he has such a unique style of carving, i love just going in to his shop to have a look at what he’s at and a bit of a chat with him.

while we were talking, he asked me what my favourite animal was. i said, a dog. he took what he was doing out of the clamp and stuck in a little bit of wood instead and started chipping away. while he was doing that, he started telling me about the greatest dog of all, Cú Chulainn. 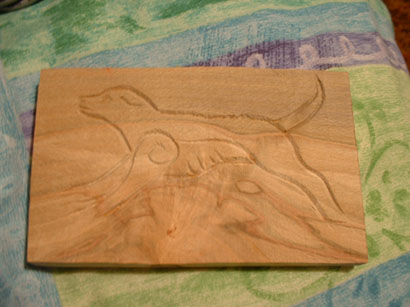 then he flipped it over and asked me if i knew Knocknarae. it’s a mountain outside the town with a mound on the top where queen maedbh is suppoed to be buried. then he asked me what i go by, and how i liked to spell it. he chipped in my name, whipped it out of the clamp and gave it to me. 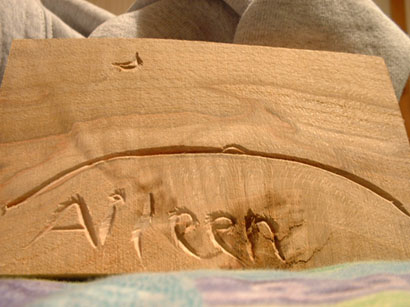 the grain in the wood is the sky. he said that at certain times of the year, when the moon is in a certain phase, it sets directly over maedbh’s tomb. how cool is that though.

my dad very kindly gave me the lend of a little digital camera he has, so i have some better pictures to show 🙂 here’s the progress on the sock…. 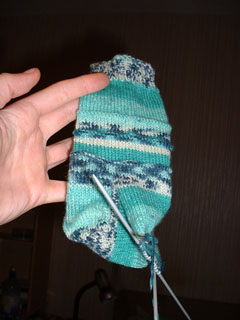 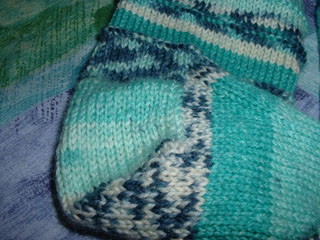 this gives a much better idea of how the shawl i knitted for mum for christmas turned out: 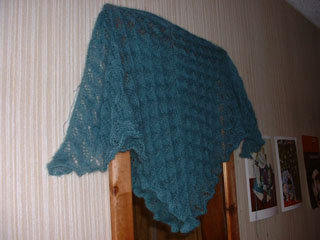 …and the detail of the stitching: 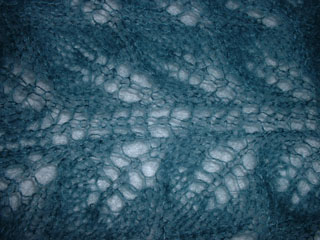 lastly! i picked up a ball of cream wool in sligo to make aoife a scarf. i’m thinking about a narrow version of this. aoife was the girl who made my concerto dress last year, and i’ve always intended making her something to say thanks for doing such a good job. 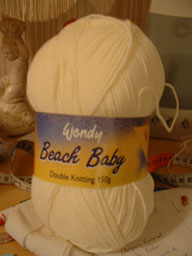