Things are beginning to even out a bit around here. I have some more days work lined up before Christmas but nothing crazy or very time-consuming so I am getting back to into my usual routine. Unfortunately, my stint of work on Footloose the other week aggravated some underlying tendonitis I am prone to in my left arm so I had to give the knitting a rest for a while. I did some sewing instead.

When I was in Galway for Tom Loves a Lord, the one-man play I played for, I had a little spare time to check out Pippa Blue (formerly Yarn). They have fantastic fabrics and patterns listed on their website and I wanted to see them in person. Unluckily for me, it was the same weekend as the Knitting & Stitching show so it was all out of town. Not to be deterred, I decided to have a look in Hickey’s instead and came up trumps with the Anna tunic pattern. It seems that the Hickey’s chain has now started carrying Amy Butler’s fabric and pattern line.

I had a few days at home shortly after that. Since this is my very first dress pattern, I decided to mock it up using some old curtain fabric. It was suitably ugly but I learned a lot from making a rough example first. There were techniques such as making button loops and sewing gathers that I had never done before. Back in Dublin, I picked up some gorgeous navy herringbone wool/cashmere in Murphy Sheehy’s and slowly, slowly made my way through the pattern. 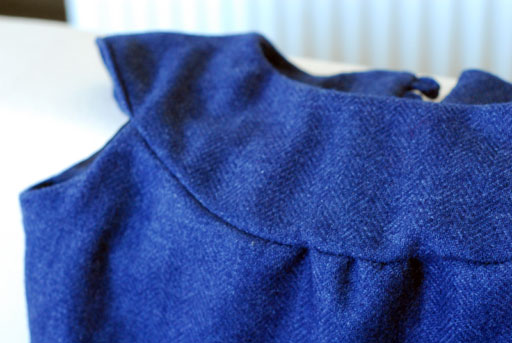 I am just waiting on some buttons now! I got it all hemmed last night. Let me tell you – all that finishing where you attach the lining and do the hems, that really sucks up time. I will write more about my experience with the pattern and sewing my first dress when I get some modelled shots.

Whilst hunting in a drawer for something or other, I came across some lovely fat quarters I’ve been saving for nothing in particular. I decided to dig out my embroidery box and make up some hankies. It is the weather for it, after all!

The pattern is from a Sublime Stitching kit I’ve had for a few years now. All I did was cut out a 20cm square of fat quarter and of the white. I embroidered the white and then sewed them together, right sides together, leaving a little gap on one side to turn it right side out. To finish, I hand-sewed the gap shut and gave them an iron. I made two in an evening. I just find there is something so nice about pulling one out at a traffic light to blow my nose. I don’t know why. I will definitely be making more of these.

One thought on “Current events”