Every now and then I come across little things that I think are cool. They’re not really substantial enough to post about on their own so I’ve been making little collections. Here’s my first offering.

Favourite Thing the first is something I have had for absolutely ages: a Knit Kit. I initially bought one as a totally unnecessary purchase from This is Knit. It was about €15 or €16 if I remember correctly and thought it was a bit expensive. But I wanted to see what all the fuss was about and frankly, I don’t know how I managed without this yoke. 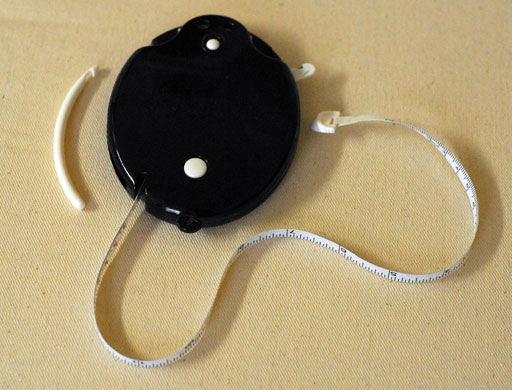 On the left there’s a little crochet hook that pops out of the side of the case. It’s pretty curvy – I don’t think I’d be crocheting garments on it any time soon – but for picking up dropped stitches or just a few along an edge for a band, it does the job. On the top is a row counter. I have always managed without but find myself using this one regularly enough. On the right is a tiny fold out piece of plastic with a small part of exposed blade for cutting yarn. You know when you’re finished a section and you want to plough on, start the next bit and not hunt for your scissors? On the bottom is the measuring tape. Finally a method that sticks the tape to something you can’t lose easily…!

The back looks like this and opens up like this. If you visit the product website, you’ll see that a really neat fold-up safety scissors comes included. I had mine confiscated in Dublin airport (not any other European or US airport I’ve brought it through, mind)(and I found it funny that they took the blunt scissors and not the many darning and sewing needles I had in the same compartment). As you can see the compartment is big enough for stitch holders, point protectors, those Knit Picks allen keys and darning needles. Again, great to have them all together in something that is too big to misplace easily.

Like I said, I found it a bit expensive when I didn’t know whether or not it would be useful. Personally, I feel that by now I’ve gotten my money’s worth, thanks to not having to replace my tape measure every few months!

Favourite Thing the second: Hallowe’en and all the little preparations we make for it. Last Friday, I saw kids coming home from school in their costumes (a pre-event exclusive, no doubt). My next door neighbour has a life sized skeleton hanging from her tree. I never did trick-or-treating as a kid. Instead we went next door to my granny and we played games like ducking for apples (ducking for money was better but you really had to work for it), saucers and that game where you peel an apple in one go and throw the skin over your shoulder and it’s supposed to make the shape of the initial of your future husband. We used to crack hard nuts with a hammer on the tiles around the open fire – almonds were the best but the hardest and resulted in the most amount of sore thumbs in proportion to nuts extracted. I also remember the novelty coconut that would inevitably have to be drilled open.

I like how Hallowe’en is such an old, old festival that seems forever tied in with remembering the dead. In Mexico they celebrate Dia de los Muertos, or Day of the Dead. They make a small shrine to the loved ones that have died and put out their favourite foods and drinks and things. The skull is a popular cultural icon for this day and in that spirit, I used this pattern (Ravelry link) to crochet up a few and get Bertha in vogue. 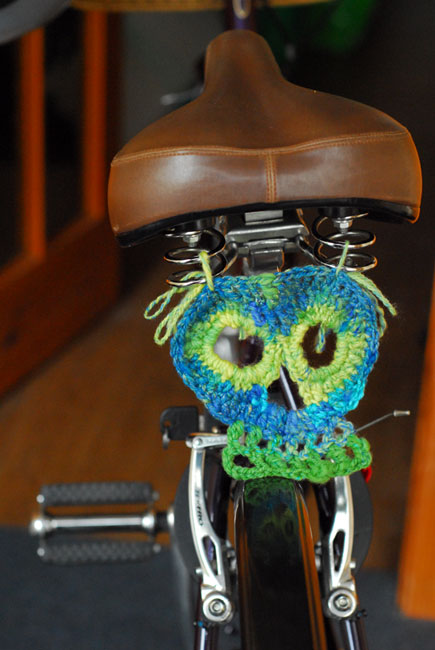 It’s a really easy pattern and I was able to use up some handspun. 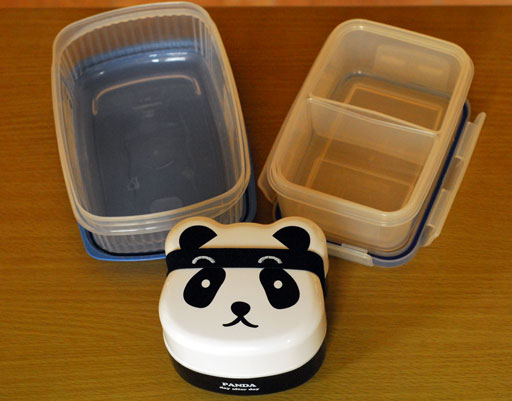 I’m allergic to gluten and dairy so when I’m working away from home I usually bring a lunchbox with me. I used to make sandwiches with gluten free bread but the bread was working out pretty expensive and they weren’t that nice anyway. I stumbled upon the idea of bento – an asian idea of bringing a home-packed meal. A quick look on Flickr will show that this is no measly sandwich we’re talking about here. Some people spend insane amounts of time on these things. Me, I take rice left over from dinner, cook up some eggs (poached, scrambled, boiled, omelette), throw in anything else good left over in the fridge, bit of fruit, good to go. I use silicon bun cases for separating the occasional wet items (Aldi had them on offer last week, did you see? 12 for €2.99).

A lot of people write about how colourful lunchboxes keep their kids interested… err, it doesn’t hurt for bigger people either. I find myself looking forward to lunch more. And hey, anything that saves money and uses up leftovers is good, right? I’ve found it makes me a bit more creative about dinner so that I have something nice for lunch the next day!

(If you’re curious, the panda box I got from Amazon and had a friend bring it home to me when she was coming over. It breaks up like this. The plastic lid helps keep wet stuff in its place. Happily, I don’t think I will ever be too much of a grown up to use this. It makes me smile every time I take it out of my bag and I think the elastic band makes it look like a ninja panda! I use a spork or if I’ve forgotten to wash it, just grab some regular stuff and wrap it in some kitchen towel.)

One thought on “My Favourite Things #1”