I think there is a good case for adding this to one of the certainties of life: death, taxes and autumn is for knitting. Peasy (Ravelry link – it doesn’t seem to exist ‘on the outside’) got finished up in the blink of an eye but has been languishing for want of buttons. 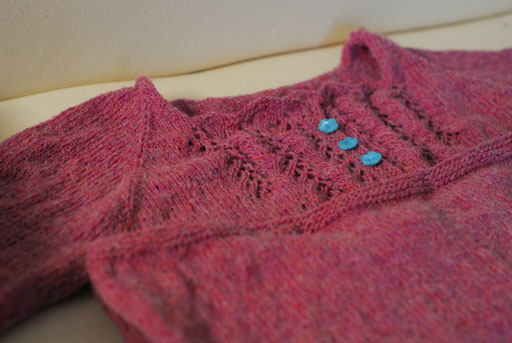 I have been trying out a few in my own collection, such as those pretty blue flower ones that I got in Knopenwinkel a few years ago. But they just don’t work. I think I need some small wooden ones to go with the tweediness of the yarn. I will keep looking.

I am being drawn towards lighter knits and knits with big collars and short sleeves because they are more practical to wear on the bike. I had been hmmming and hawwwing about the Twenty Ten cardigan since it came out last March. Then I spotted this new range of Drops Nepal chez Constant Knitter and I knew it had to be. 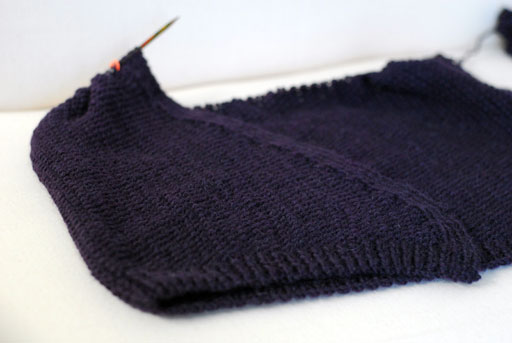 The button band is coming out a little… eccentric… because I keep losing track of when I should put in a buttonhole. I suppose the dark colour doesn’t help but it really is a delicious plum colour and do you see that gentle fuzz? It is positively edible. I have stalled at the underarms because I keep forgetting to go get the pattern before I sit down (yes, sorry, I am that lazy; now you see why the cycling is good for me…). I’m sure I will progress someday soon. I think the A-line shape has the potential of making me look like a sack of potatoes so I’m leaving that out and just working it straight.

And, hilariously, because I was too lazy to go get my pattern I just cast on for something else instead. This is definitely in the mindless-stockinette category. Perhaps this is just as well because the NBA pre-season has started and we are back to our rota of rationing Toronto Raptors games. Behold the glory that is the Malabrigo Sock. 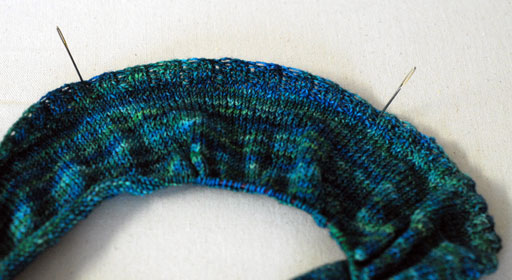 The pattern is another one of Veera’s that came out this week – Folded. Like the Twenty Ten cardigan, it has a very pronounced A-line so I have decided to leave it out and work a size smaller to get a more fitted body. The drapiness suits her but I think that the 38″ inches of fabric around my hips specified for my size wouldn’t be especially flattering!

I had some work this morning in the Academy playing for two auditions. To my pleasure, they were scheduled first and I was able to capture the best of the morning riding in at 830. I leave you with this shot of the Beckett Bridge, taken from the Talbot bridge at about ten to nine, and wish you a peaceful end to your weekend. 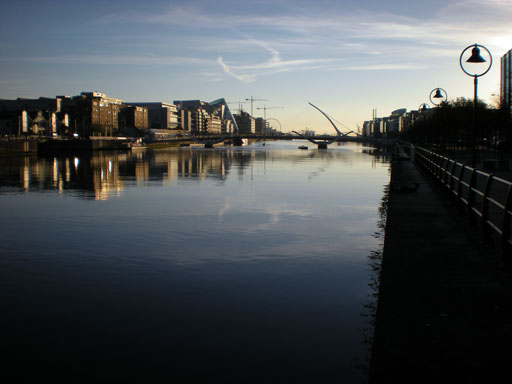 Some other snaps in the set here.

6 thoughts on “Autumn is for knitting”