I had a great Paddy’s weekend, but not in the usual sense (ie, sitting in a pub all day). Alb drove up on Friday night, and on Saturday we set off for the Céide Fields. We had great weather and fantastic visibility, but it was very windy and very cold. The Fields aren’t nearly as interesting to look at as Newgrange, but the general area has stunning scenery and is even more barren and desolate than Connemara. After some lunch, we drove to Downpatrick Head. There is a great view of the cliffs and sea stack from the Céide Fields, so we decided to try and get a bit closer to the sea stack. As it turns out there is a really crap road out to the cliffs. We hiked up and spent a good 45 minutes hanging off the edge on our bellies to get good shots of the sea stack. I had my dad’s bronica (yumyum) and the D70; hopefully between them I’ll get a few good ones. There is a huge blow hole near the cliff edge, but it’s got an enormous fence around it. This is because a few ago, a woman drove her car and her kids into it.

There was much knitting and crochet to be had over the weekend too! My purple jumper has turned into a monstrosity, which means the body is almost complete. I hope that the sleeves will be a bit quicker to complete. I didn’t bother taking a picture of it because it is just a big purple lump.

Check out the crochet though 😀 Here is another facecloth that I made. I wanted to do bobbles crochet-style. 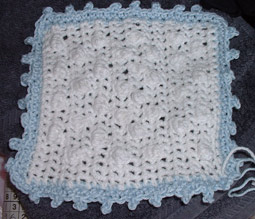 And here is a hat that I made last night. It’s the PDQ from Happy Hooker. It is a really quick project, and looks pretty funky too! I still have to weave in ends and do the edging. 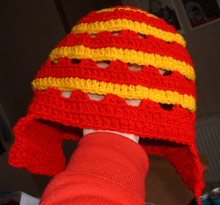 When you see it on my head, you can see the effect of the shell stitching better (the gaps in the middle).

I used the wool from my Gryffindor scarf that is simply a non-starter. Maybe I’ll crochet a scarf to match instead. It’s so much quicker than knitting.

So my secret pal revealed herself to me yesterday 😀 She’s from near Seattle! That is a really long way away. It’s like two Atlantic oceans away. Sarah – the word ‘wellies’ is short for wellingtons. They’re rubber boots that come up to your knees and you wear them in mud and out in the rain. They’re standard issue in the west of ireland 😀