Summer is floating along. Elina and I played at the Boyle Arts Festival last week. As you can see, we are starting to keep good company! 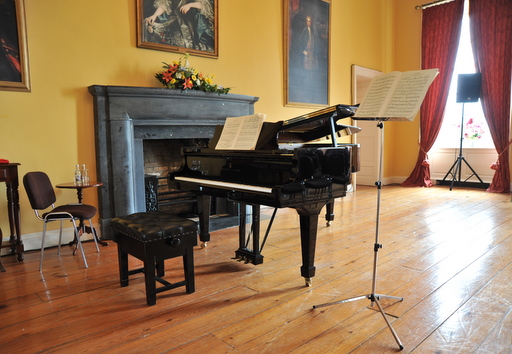 Next week, we’ll be in Finland (where Elina is from) for some concerts and then masterclasses at the Turku Festival. Founded in 1960, this is a renowned chamber music festival and I am very excited to be going. Also, it is not often you get to be shown around Finland by a Finn. You can expect to hear more about our adventures in the coming year! After a few months of playing together, it became very clear that this is a good partnership and, surprisingly, exactly what we both wanted. Most pianists and violinists are interested in just solo playing or, for the violinist anyway, orchestral playing. Most dip into chamber music now and then but rarely pursue it singularly – in Ireland, anyway. For us, we came to the conclusion that we are both good but far, far better together. Together, we will probably achieve much more than would be possible alone (and have a lot more fun doing it). So to Finland we go!

I have a lot of knitting to show you but I am going to try and spread it out because I don’t expect to have a lot of computer time for the rest of the month. Happy knitting, everyone! (Did you see the Autumn issue of Twist is out already? I love this time of year!)