It is starting to shape up a bit like Summer around here. We had high temperatures over the weekend – up into the low 20s – and even though the air temperature has dropped considerably to the low teens, we have had blistering sun every day this week.

I have a thing for cotton cardigans. I don’t own any, it just fits into some sort of Bridget-Bardot-post-war mental image I have of Summer on an island (which we are, even though it doesn’t feel like it most of the time). You know, warm enough for cotton but cool enough to need a cardigan. This is where Audrey in Unst comes in. 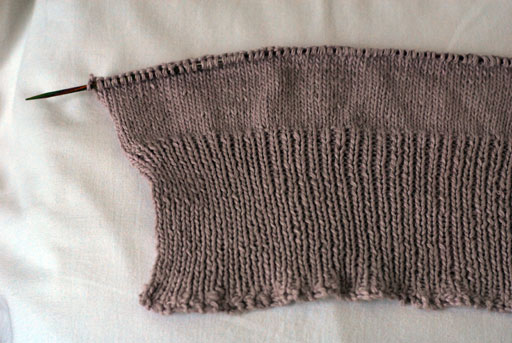 I just looked up what ‘unst’ means and it doesn’t mean anything because it’s a place – one of the islands in the Shetlands! That’s funny. Anyway, the yarn is a deliciously pale pink called Amalfi by Debbie Bliss. I got it from This is Knit. I needed to go down to a 3mm needle to get gauge so it’s fairly slow going but I’m cranking it out a little at a time.

During my spring clean, I happened upon my mountain of crochet blocks. I had maybe about thirty so at the weekend, I sat down and started joining them up. It took no length at all to get them all attached. I had about 10 large squares from 200 Crochet Blocks and a lot of smaller motifs from Beyond the Square. I crocheted the large motifs together for the centre and then used up all the smaller ones as a border. It is still not much bigger than a generous lap blanket so I have decided to work up about fifteen more large square, attach them, and then work the border in brown. I have seven after the weekend of absently working away and watching tv. 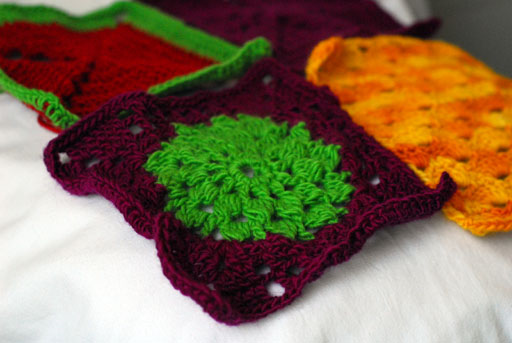 These guys are perfect for working up in warmer weather and it is very pleasant joining them all up with the blanket on your lap when it is cooler in the evening. More, please!

3 thoughts on “WIPs for Summer”