I seem to have broken the knitting jinx that has been upon me with the completion of my first goat (the second goat is nearly halfway there). While I was casting off the sleeve cap, I was filled with enlightenment (relief) and a voice said to me (Alb) to finish off the Fountain Pen shawl while I was at it (tidy up a bit). 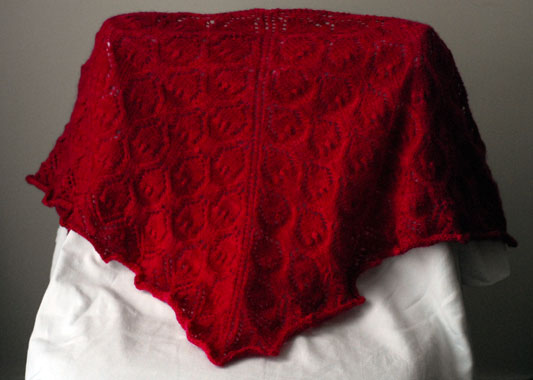 I haven’t blocked it out yet so the lace isn’t stretched to its full capacity. I think it is still pretty, though. 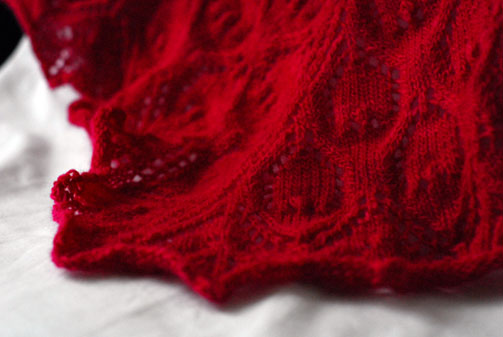 Yarn: 1 skein of Malabrigo Merino Lace, picked up at Fadeninsel in Berlin.

Modifications: Obviously the yardage of the Malabrigo isn’t nearly anything like the Helen’s Lace called for by the pattern so I cut down on the number of repeats of the main chart. I squeezed seven repeats out of it and had a little bit left over.

Verdict: It’s a winner! The pattern was interesting enough to maintain my interest but still be easy enough to keep an eye on something else at the same time. It’s up there with the Swallowtail Shawl in terms of prettiness and knitability. The yarn is gorgeous, very soft, and I think I will definitely be using it again for another project. It is warm and lofty and would make a nice spring garment, I think.

Anyway, so jubilant was my release from the knitting black hole within which I found myself, I have been casting on for new things left, right and centre! (And there are more over there, too). First up is Liesl. 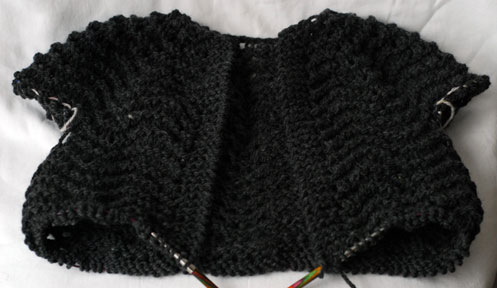 If it looks very small to you, that’s because it is! I got gauge but upon thought and research, decided to knit the 34″ size as opposed to the 38″ size (I would need a 36″ size) because most comments I read oscillated between “really wearable garment” and “stretches out like crazy when you block it”. I have tried it on a few times and am very happy with the fit under the arms and across the back. Obviously, it doesn’t meet at the front but recently I have found that more practical for me, as it is less restrictive when I play or practice. With this in mind, I haven’t knitted in any button holes. If it does stretch a lot when I block it and I find I do need buttons, what I might do is just crochet some loops on one side to accommodate a closure. Either way, it is a ridiculously quick knit – I knit all that yesterday afternoon! I am also trying out a new yarn (to me, anyway). It is Garn Studio Alaska, a 100% wool aran weight yarn that I picked up from the Constant Knitter a while ago. 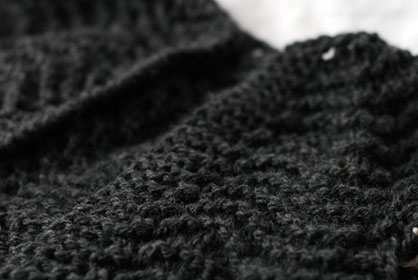 I like it a lot. It’s got great bounce, stitch definition and yardage for the price (€2.50 for 75m). I have just started my fourth ball of eight so I’m hoping to get a decent length out of it!

Of course, because I had just cast off a shawl, I had to start a new one… Actually, this one has been at the top of my wishlist for a few months now. 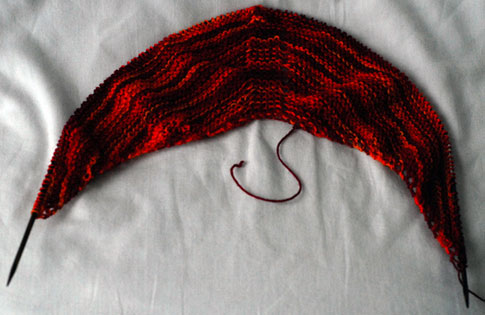 The pattern is free here and in my opinion, perfect for showing off those delicious hand-dyed skeins of sock yarn that are far too nice to be knit into socks. I had such a skein that I bought off Clare about this time last year. I love the colours but had a hard time coming up with a sock pattern that would do it justice. 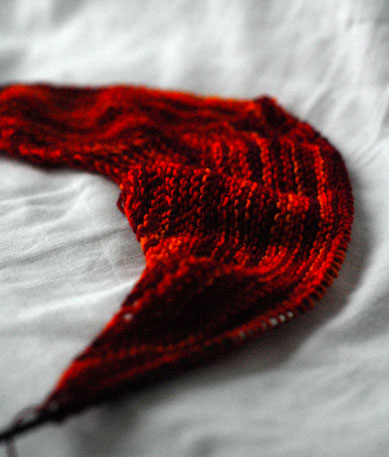 I think there really is something about garter stitch when it comes to self striping yarns.

My sister is home for a short visit and, at my request, brought me Made in Brooklyn. Swoon! More about it soon 🙂

3 thoughts on “FO – Fountain Pen Shawl (and many WIPS)”