Shortly after my last post, I moved from crochet flowers to crochet blocks. This move brought with it the overwhelming desire to crochet a sampler blanket for the sofa. I have had a fluffy pink blanket on the sofa for at least a year now but Alb’s beard has a habit of shredding it up and dispersing pink fluff balls all around the house. I decided to go for the Lamb’s Pride Worsted. It comes in a brilliant range of colours, has a nice natural fibre mix and is good value for money.

I have been doing one or two a night over the last few days. Each one takes about half an hour and ends up 4″ square. 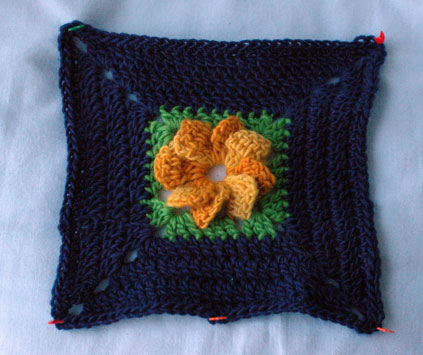 I still haven’t quite decided on how I am going to put them together. I might crochet them directly together or put a strip between each row and column. Either way, I am going to use that rich brown, Chocolate Soufflé, to tie the whole thing together. 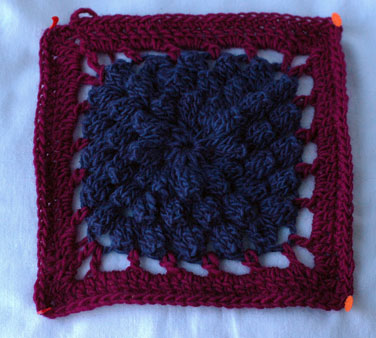 Much as I love working the blocks, I started looking around for more inspiration and found this. Hexagons! Triangles! Stars! I ordered it on Saturday night and simply cannot wait until it arrives. 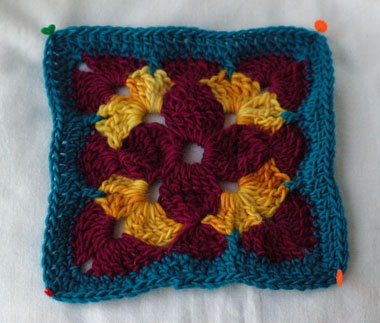 I have been working away on my magazine project. I finally figured out what I wanted to do with the neckline and the rest fell fairly easily into place. And just for the heck of it, I finished up a mitten during the week. 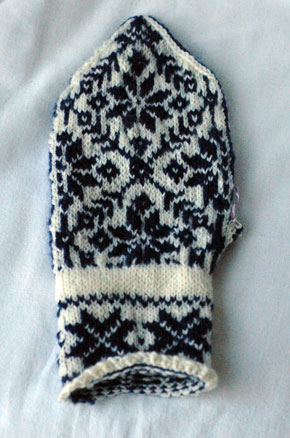 Granted, it does need a thumb – and a mate – but I’m halfway there! My lost pair of mittens never turned up in the lost and found so I hope whoever has them is being kept toasty (and that the alpaca is fiendishly tickling their nose just like it did mine).

I have been thinking a lot about future projects. I have a lot of music projects under way and they are rolling along very pleasantly. I am finishing up the last of my magazine projects for now and have been thinking about what I am going to do next. I have a large quantity of stash that I have had ear-marked for personal design projects for a long time. I think I will start working through it and just pop the patterns up here when I’m done. I have ideas for some really nice things!

The last thing I have been thinking a lot about is the Guild. I have been stalling big time on this mostly because I haven’t been certain of my own situation and because I have had a hard time coming up with a plan of action. I have one now! First thing is a website. I have started pestering Alb about it and hope to get things going on it later today. It will almost certainly be nothing more than a blog with some information pages attached to it, but it’ll be a start.