About two weeks ago, I succumbed to a pompom maker. I am one of those people who consider buying a pompom maker excessively decadent… but I am yet to be consumed by guilt… 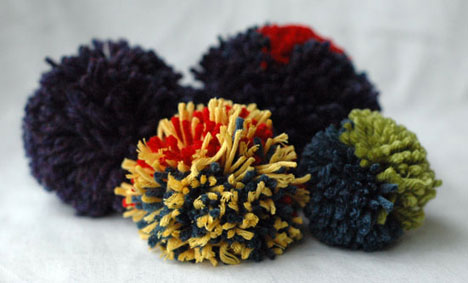 …because they’re so much fun!

The way the gadget is made, you are spared the tedium of trying to squeeze the ball through the centre hole of the cardboard circle. Consequently, you aren’t limited in how big you want to make the pompom, either. Brilliant for using up odds and ends (of which I have many), for embellishing, ornamenting or plain messing about.

In between the madness of travelling and the Knitting and Stitching Show, I have been working away on Bloom and on the Icelandic Sweater. I finished the front part of Bloom last night. 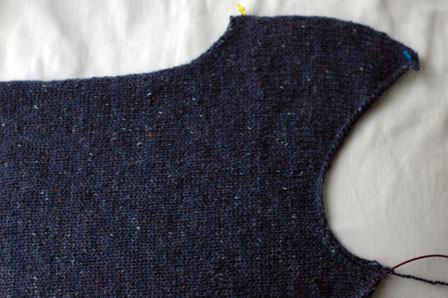 Despite sensible warning about how the shoulders can come out odd, mine look ok so far. I shall remain watchful. The Icelandic Sweater has been… interesting. 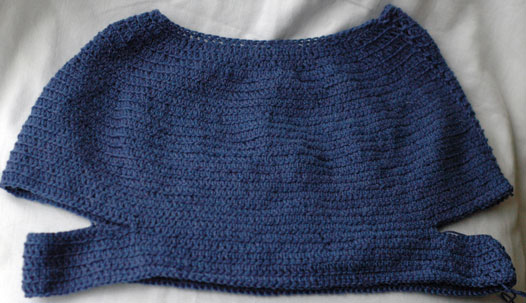 For a start, I had many gauge issues and after going through practically every hook I own, I ended up on a 2.5mm. I kept following the increases for the yoke as written and kept trying it on, so was happy with the result when I came to divide off the sleeves and the body. However, it turns out that I missed 30 stitches somewhere so my division for the sleeves looked extremely odd. If you think that I am going to rip out 20 rows of 193 stitches to find where I made my error, you must be crazy…! I did some totting up and reworked the division so now I have the perfect situation where I have a yoke that fits perfectly and still have the right number of stitches I need to follow the pattern for the body.

The Knitting & Stitching Show was both good fun and hard work. It was brilliant to meet people I know from the shop. A girl who had come in only last Thursday wanting the makings of a scarf so she could teach herself to knit appeared before me, having already finished her scarf and looking for something else to do. Aoibhe came with her mum, who had just bought a brilliant book of Tea Cozies (never underestimate the dual purpose of tea cozies: piping hot tea and a great hat to wear to the Electric Picnic). I also got to meet lots of new people, including the lovely Lou from Yarn Forward and Mary Whelan from the Crafts Council. 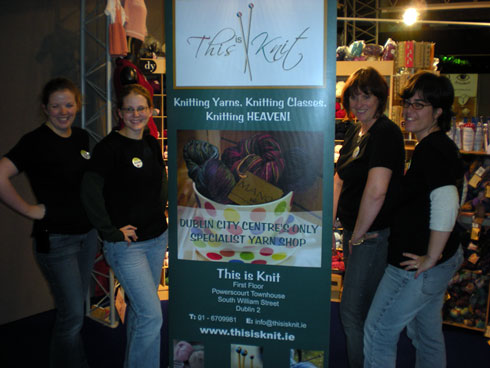 L-R: Lisa, myself, did you know we have a shop in the city centre?, Jacqui, Elana

It has been a year since I brought up the issue about a knitting and crochet guild! Unfortunately (for me and for the cause), this year has been extremely disruptive. I was very ill in January, very busy until April, away examining in May, away for July, away August – September, away again at the end of last month… I actually haven’t been at home for more than three consecutive weeks since last April. Such conditions are not conducive to anything, I have found. Meeting Mary and meeting so many knitters and crocheters from all over has renewed not only my enthusiasm but my desire to create a hub, a point of focus for everybody. It has to happen! …so excuse me while I go and write some policies 😛

4 thoughts on “Bits and Bobs”