I haven’t been able to work on anything else for the last few days. I haven’t even been able to think about working on anything else. I finished the back, started on the hood and made powerful progress during our Tuesday evening classes… a little too powerful though, because I mis-crossed a cable on the side of the hood in a very exposed area. So yesterday morning, I got to it. 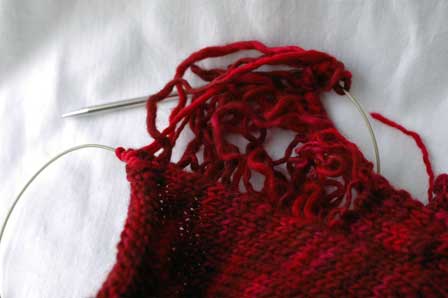 I dropped down about 30 rows to where I had mis-crossed the cable. Then I used a crochet hook to re-cross the cable properly and hook my stitches back up to where I was. 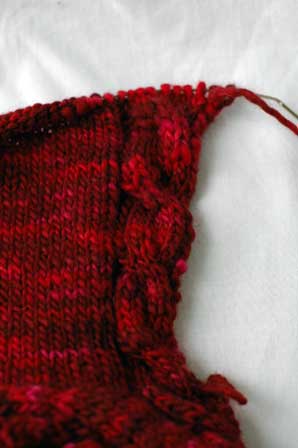 I realise it sounds horribly complicated but it is really quite straight forward and is much, much easier than ripping the whole lot out. I am really happy with the way the hood turned out. It looks a little pointy here but that’s because I want to show you the hood shaping and the way the cable peters out. I’m going to steam it out into a nice roundy hood later! 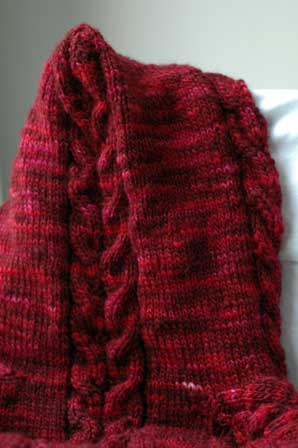 Too much elf input perhaps?

The pattern doesn’t say you should carry the cable up the back of the hood, but I think it looks nice, don’t you? I also didn’t see any sense in casting off the two sides of the hood and then sewing them together – I grafted them instead. 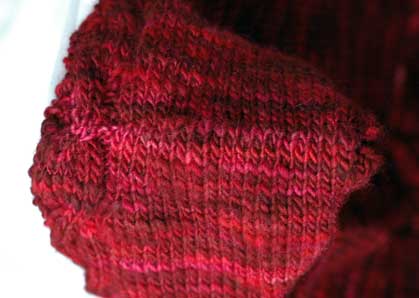 I spent yesterday evening setting the sleeves in which led me to a slight problem… the sleeves are really tight. It’s a struggle to get them on. It is a bit of a mystery because the rest of it fits fine. Laura and Heidi assured me that they’ll stretch out and that the upper sleeves looked fine. Good to have voices of reason around, eh? I was considering ripping out the sleeves and re-knitting them really quickly on bigger needles. Anyway, they’re both set in now and it was worth the effort. All that remains is to knit on the button bands and get some buttons! I saw some great buttons in This is Knit but you’re going to have to wait and see what they look like!

I did a little submission work. I suppose I’d prefer to be doing a little more and working on some other ideas but I’m really going to have to get that red monster out of my system first. 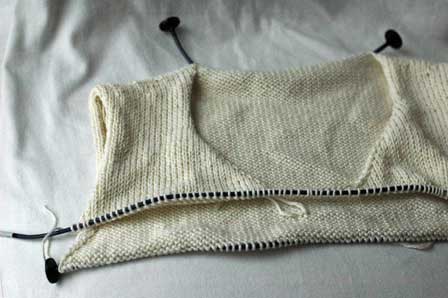 It will be pretty, though, honest.