I have either learned how to knit in my sleep or the elves have been helping me again. I suspect the latter. 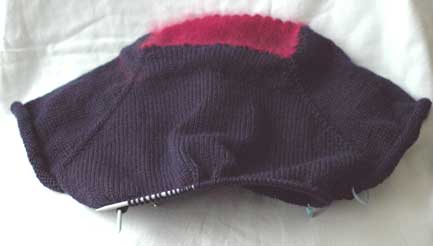 I tried it on last night before I joined the body in the round and separated off the sleeves. I was expecting it to fit so that wasn’t a big surprise… but the shape of the neck was. Obviously because I didn’t work a ribbed border around the neckline, I was going to end up with the square raglan neckline. I knew that. I just wasn’t expecting it to be something that I really liked the look of! The angora hem makes it so snuggly. Sleeves are up next because I can never face them when I’ve finished the body.

While the elves were at work, I got some swatching done for the aran jacket I mentioned. Since the idea first struck, I have been quite decided on using a Saxon braid as the zip placket.

When I first worked this up, I hated it. It was too loose to be a placket, it would lose shape and be floppy. I left it down and went looking for a different braid to use. I came up with this one. I think it’s called a five-plait braid. 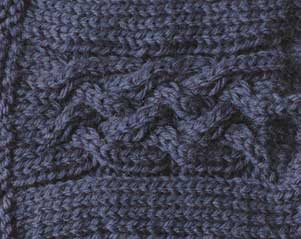 I knitted this on to the end of the Saxon braid. When I was finished, I cast off the entire thing and left it down for a while on the chair. I returned later to find that both cables had ‘settled’ and were far denser than I initially thought. And, when observed from the distance, the Saxon braid was much more striking than the five plait braid. Saxon braid it is! I may use the other one as an edging on the cuffs, since it looks fairly similar but isn’t as busy as the Saxon braid.

I found a solution to the collar for my dad’s jumper: I won’t make a mitred corner at the V-neck, I will knit it back and forth and lay the front left bit over the front right and sew them down. A little bulky perhaps but better than a really crappy mitred corner. Then there is the issue of the short rows for the back. I can’t face ripping out 4 inches of ribbing at 280 stitches per row. Nor can I face taking out the stupid sewn cast off. I think I’ll cut a hole above the ribbing, pick up the stitches, knit in the extra wedge, and graft to the bottom edge of the hole (this idea may have been the elves’ doing).