Argosy was still blocking when my sister flew back to the States on Tuesday. A pity she couldn’t take it with her; Tuesday, after all, was her birthday. But it’s an ill wind because I was able to get some snaps of it before I stick it in the post today. When I was knitting it, the fabric curled up like there was no tomorrow. The magic of blocking lives on! 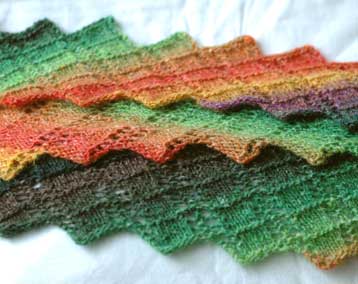 I got the stitches all picked up for the collar of the navy jumper… and that was as far as I got. I soon realised that I would need a plan of action to shape the V-neck properly. Work took over for a few days so I’m looking forward to sitting down with it later today and sorting it out. I can’t wait to get the jumper done. It is overdue and I am ready to move on to something else. 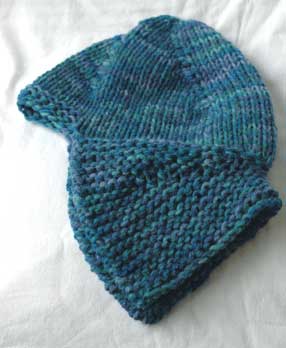 I originally intended to use my recent purchase of blue faced leicester to knit the tam pattern from Knitting Nature. After thinking it over, I decided that the yarn and pattern wouldn’t do each other justice. Since I was all fired up to knit a hat, I reached for my trusty Knitter’s Almanac and EZ’s bevy of hats for the month of June. Having already knitted the Ganomy hat and wanting to keep the Three-cornered Tam for Talk Like a Pirate Day, I decided on the Maltese Fisherman’s Hat. I’m not familiar with the fashions of Maltese fishermen… to me it looks more like a Viking hat.

Isn’t it unusual? I imagine it’s what all the hip Vikings wore under their helmets. The short-row shaping around the back of the head makes the hat hug your ears and neck. The garter stitch band is echoed in the decreases for the crown, which are worked as a purl-2-together. EZ calls for the hat to be worked into a very pointy crown. I did that initially but it looked ridiculous. I ripped it back and kept the crown fairly flat. The hat is a little shallower than I usually wear because of this, but only by a row or two, and I much prefer a slightly shorter hat than a pointy hat. I worked the Blue Faced Leicester two strands held together on 8mm needles.

I think I’ll make another! I made this one in about two hours.

In other news, things are beginning to settle down and go more according to plan. I’ve got a break in teaching because of Hallowe’en – not my choice – and only realised yesterday that I won’t be working next week. This, of course, leaves me free to go to the Knitting and Stitching Show. Muahahahah! The ultimate test of willpower! Actually, I wouldn’t mind looking for a swift (I live alone and have tried everything. I’m at the end of my tether). But will I re-emerge financially intact??

3 thoughts on “A little distraction”