I can always tell the end of a holiday is nigh when the drama comes back. Lots of emails, phonecalls, scheduling, diary filling up. Playing for a wedding on Saturday. Meant to be teaching on Thursday but due to unforeseen family circumstances I’ve had to cancel. Due to start my other teaching job next week too. I’ve had a singer on to me about doing a gig in Donegal but can’t get in contact with her. Had someone else get in touch with me about a gig in Sligo in December because someone panicked and pulled out. So I had a hectic morning of pencilling things in, rubbing things out, moving things about and doing the hokey pokey.

What better antidote to end-of-holiday packing fatigue than a slap up meal down at the diner! I’ll never eat in Eddie Rockets again. 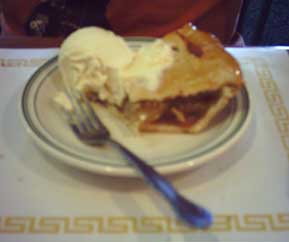 We took it easy last weekend. Saturday, we slept in and went to the mall. I scored a swanky Ann Taylour skirt for $20 in a sale. Sunday, we drove down to Jersey shore to cheer my sister on in her first triathlon. She did really well! She did a 750m swim, 20k cycle and 5k run in 1 hour 20 mins. Super, no? She drove back with her fellow triathlon friends and Alb, David (brother in law), Liam (nephew) and I went to fly our pirate ship kite down on the beach. I kid you not. It was yarrrrsome!

Yesterday was our last day in Manhattan. We went up to the top of the Rockefeller centre, which is now rival to the Empire State building. It’s not as high but we had a great view of the Empire State from the Rockefeller. I was up the ES about ten years ago and have horrible memories of interminable queues, horrible crowds and barely being able to see over the parapet. Top of the Rock was fantastic: no queue, no crowds, and a see-through parapet. After, we went to B&H way over on 9th avenue. It was worth the walk, though. Seeing is believing! I’ve been in lots of huge stores but this one is different. You can examine and compare every item of stock in person in the shop but when you want to buy something, you go to the desk and tell them what you want. Pretend you want a camera, but just as you’ve told the guy, you realise that you’ll need a memory card, a tripod and a camera bag. You tell him exactly what you want and a green cart descends from the ceiling and whizzes around the shop to the specific areas whereupon a clerk will pop in your card, tripod or bag and send it on to the next area until your order is fulfilled. You, in the meantime, wander on over to the pay area, all the while watching the conveyor belts and green carts zooming along over your head, and by the time you’ve forked over your moolah, it’s in all bag waiting for collection. Did I mention it is dirt cheap too? Afterwards, we hung around Times Square until it got dark, ate burritos, and took photos.

I hear it is raining at home. Be still, my beating heart.