Firstly, check out my new banner! Muchos Huggos to Alberto Supremo for sorting me out with it! Check out more of his excellent photos at focus pocus. \o/

I am about half way through my first sleeve for Lucky. I was ploughing through it when I just cracked up. Sleeves drive me crazy. No one ever appreciates how big they are. They make me wish we never had arms and could knit with our feet.

So, prompted by “katie knits”, I dug out my Knitting Without Tears book, and decided the quick fix I needed was a tam. A tam is a beret. Alb and I came to the conclusion that the people who called it a tam didn’t know the french existed. As for Tam O’ Shanty, it sounds like someone who lives down the road. I always get shanty and shandy mixed. “I’ll have a rock shanty please”.

Really, it was destined to be a disaster. I got two balls of Noro Kureyon to make those Hurry Up Spring armwarmers. I finished the pair out of one ball, and was cursing the book for saying that you need two balls. Obviously, you need to use the second ball to knit the second armwarmer so that they’ll match. So I had another ball left over, andI decided to use it for the tam. It was going well until I got to the increases in the middle to make it puff out, and I realised there was no way I would have enough wool. When I eventually ran out, I dug out this brown wool I found in the attic at home. The most nibbled balls I threw away but this one seemed ok. Mum said she’d used it to make a top back in the 70s. She says the top disappeared; maybe the mice got that one too.

When I joined on the brown wool, there were bits that were threadbare from being nibbled! So it kept breaking, and now I have a million ends to weave in. Despite all of that, I got impatient, and cut out about an inch and a half of the body, because I didn’t want half a crumby mouse-eaten brown hat and half a great Noro hat.

The result? I now have a tam that makes me look like I am in want of an organ grinder and a monkey. 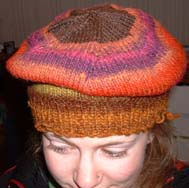 All is not lost though. I’ll rip it up and use the Noro to make a pretty little felted purse that I’ve been wanting to make for ages anyway. I am going to throw away that brown wool, it can’t be hygienic! And in the course of looking for the brown wool, I found two lovely balls of white rowan baby soft, so I think I’ll make a proper tam out of that instead.

Remember the postal order I sent off to Yarn? Well, she sent on my magazines – Rowan 37 and 38 – by return of post so I got them this morning! It cheered me up so much that I did hours and hours of practice. I wanted to space out looking at them over the day to make it a bit more exciting.