“It’s an ill wind that blows no luck”. In the last 24 hours I have had my fair share of both ill wind and luck! Let’s get the ill wind over with. The Puff Sleeved Cardigan. 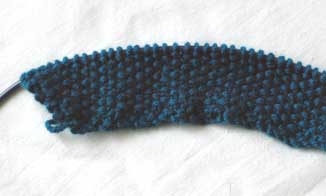 Back to square one

It was too big. Not by a lot, and it wasn’t the pattern’s fault. I even had gauge (I did! I don’t think I’ve ever had such perfect gauge). It was a combination of two things. Firstly, the assumption that I would need an inch of ease, and secondly, the assumption that I still measured the same. When it turns out that one not only doesn’t need an inch of ease, but has physically shrunk by an inch as well, one can only anticipate a vigorous rip-out.

And vigorous it was! When I stood in front of the mirror and both front pieces were overlapping without the button-band, I realised there was nothing for it. I could felt it up a little, but if it didn’t work, all I’d be left with is a too-big cardigan with unsalvageable wool. I did it as quickly as I could to prevent second thoughts. It’s not all bad though, you know. By knitting a size smaller, I won’t have to knit as much!

Needless to say, having to rip out my cardigan instead of finishing it off last night left me a bit miffed. Solution? A hat! 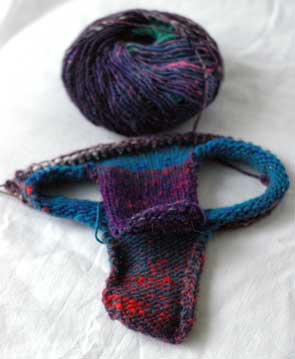 I popped out to This is Knit yesterday to pick up an extra two balls to finish my cardigan (that alone should have tipped me off that it was going to be too big – it shouldn’t need 200m more!) and on my usual grope’n’smell tour of the shop, I discovered the new Noro Silver Thaw that came in. Mmmm. At 50% wool, 25% angora and 25% nylon, it is wonderfully soft and quite matted in texture. One ball has 110m which I figured would be plenty for a hat, and it’s been a while since I knit myself an ear-flap hat.

I’ve been knitting away on my Jaywalkers, too. I got the second sock started on Friday evening and made really good progress on the journey to, from and whilst at Blackrock! Geraldine the Bear Knitter and Helen (whom I had met a long time ago but only vaguely remembered) both popped in. There was much yak, tea and biscuits! 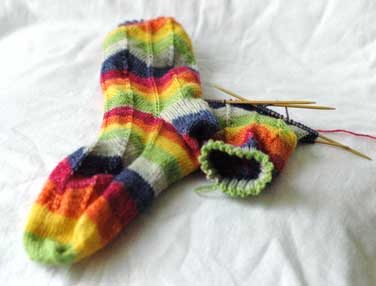 This afternoon, I finally got the time to sit down with my ball of Cashsilk and swatch for my next pattern.

It is an interesting yarn in that it works very well on both small and large needles. I’m planning on a simple V-neck summer top and found the fabric I knitted up on 5mm needles (the bit at the very bottom) to be a bit too gapey. It would be great for a shawl or Clapotis though. I tried out 3.75mm but eventually got a good result with 4.5mm. The funny looking business at the top is a stitch I am planning to use – only one though! I was trying out a few different things – how it would work with another colour, and what would happen if I used two stitches in it instead of one, and so on. I also toyed with the idea of a whole row of these stitches along the hem – which is that bulgy bit along the top. Don’t think I’ll be using that one. All in all, I’m pretty pleased and hope to get started on it tonight or tomorrow.

The best bit of luck, though, is the fact that my Rosy pattern will be live to download (every time I say that, I get this great mental image of Frankenstein coming to life… what have I created?!) really soon. Myself and Alb did a test download of it and it seems to be working fine. Lisa sent me on the finished PDF this afternoon and tells me that they have already sold a paper copy of it in the shop. Horray!