We returned from Teelin and the Sliabh Liag cliffs to Killybegs, where we had booked a B&B. Killybegs is a small town and it seemed that everyone was out on Saturday night. We thought we might not actually find a place to get some food (well there was a chipper at least), but the Chinese sorted us out in the end. Let me tell you: if you’re ever in Killybegs, have the fish. Any fish. All the fish. It’s fantastic. I had steamed seabass and when they brought it out, it became clear that they had just steamed the entire fish. Much to my relief, the waitress expertly beheaded, definned and boned it for me! A very simple dish, with ginger, scallions and fried rice, but extremely tasty.

The next day, Sunday, we retraced our tracks to Donegal town and took the bypass on to the road to Letterkenny. This involved some dodgy navigation on my part and resulted in us driving the wrong down a one way road. We got to Letterkenny in the end! As it was still early in the day, we skirted around Letterkenny (north-east corner of Donegal) and headed west towards Glenveagh National Park. The National Park covers 30,000 acres, some parts with dense forest and rich deer stocks. Glenveagh Lake and Castle are towards the north of the park, and there are many walking routes from there around the park. Here’s an idea of the valley and lake. 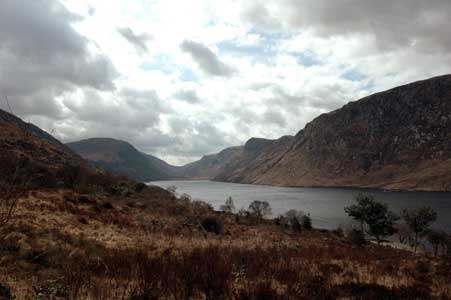 The castle is located on a promontory jutting out into the lake, and offers fantastic views of the entire valley. 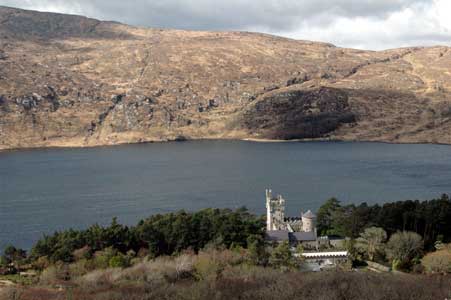 The castle was constructed some time in the 1800s and involved, as was the norm in those days, the eviction of about 280 people from the surrounding land. The guy who built it – his name escapes me – was understandably unpopular with the locals. However, when he died, his wife – Cornelia Adair – spent a lot of her remaining days there. She took an interest in the community and did a lot of social work in the area. It was Adair who introduced the deer stocks to the Park and erected fencing to keep them in. When she died, the Castle fell to a grand-nephew (I think) of Cornelia Adair. Not sure about that one. He was an American and professor of Art in Harvard University. Then another American by the name of McIlhenny bought it off him. He worked for the Museum of Fine Art in Philadelphia. McIlhenny came to Glenveagh in the 1910s I think, and spent much of his time there until he donated the Castle to the State in 1983. He died in 1986. 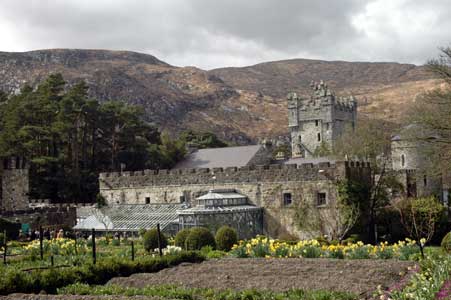 McIlhenny was responsible for the considerable development of the gardens. Above in the picture is what used to be the Kitchen Garden. Themed gardens, like the Oriental Garden and Italian Garden, spread out from either side of the Kitchen Garden, and would take a whole day to explore thoroughly.

The interior of the house is certainly a nod to McIlhenny’s background in fine art. Most of the very valuable paintings he had in the house – like Van Gogh and Landseer – were donated to the Phildadelphia Museum. However, the furniture has remained with the house and was wonderful to see. Like the gardens, there are many themed rooms in the house, including French, Italian and Chinese. Most of the furniture is George III, with clean lines, little decoration, and very functional. A fantastic example of the George III stuff would be the bookcase in the drawing room which has little gothic windows. The glass was hand-blown, so it has a marbled effect. There was variation in the furniture, though, depending on the room. The master bedroom, for example, had a Regency period bed, bureau and writing desk. The Chinese room had exquisite pieces – all black, with hand-painted scenes of the Orient. What made the furniture in the house so remarkable was not the quantity or undeniable quality of it, but the condition of every piece. It must be worth a fortune. No photos of the furniture, unfortunately, no cameras were allowed on the tour.

The funniest part of the house was the swimming pool out the back. 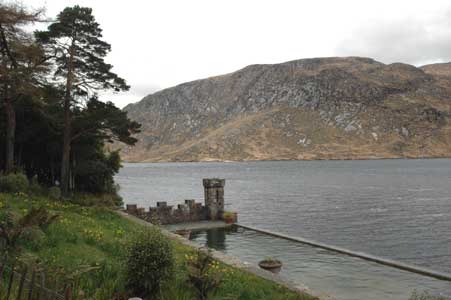 We spent much of the afternoon hiking around the castle – we climbed up to the Viewing Point, which is where I took the pictures of the Castle and valley. They – I suppose the Department of Environment – have been reintroducing the Peregrine Falcon to the area, and I was hoping to see one in flight from the Viewing Point. There was a man down in the Kitchen Garden with an owl, a falcon, and a hawk tethered to show to the public. I didn’t see a falcon up there, but I did spot a golden eagle. There has been a breeding programme of the golden eagle taking place elsewhere in the north of Donegal for some time now, and there have been sightings of eagles in the area. Even though I had my binoculars out, I couldn’t tell whether it was an eagle or a hawk. I looked it up when I came home and to the best of my knowledge, I think it was an eagle.

We headed on west to Dunglow, where we finally found a B&B. On Monday, we drove south from Dunglow back to Killybegs. I persuaded Alb to take me back to Kilcar, which was when I got my wool 🙂 It was still pretty early in the day, so we went further west out by Glencolumcille. It was very pretty but a mist had blown in off the sea and visibility was really poor, so we turned and went home to Sligo.

One thought on “Donegal Trip III”