Long time no chat! I spent the long weekend in Donegal with Alb. We drove north from my parents house here in Sligo on Saturday morning. I didn’t realise the road from Sligo to Killybegs had been re-done so we got to Donegal town in about an hour and a half – and that’s with a wool stop at the Craft Basket in Cliffony!

Donegal town is pretty small, much smaller than Sligo town, but it has its own charm. The surrounding scenery is really beautiful. On the way out of the town back to the bypass, we passed a ‘Craft Village’ which houses about five different artists and their studios. I got Alb to pull in just for a look and I’m so glad I did, because I met the nicest weaver! 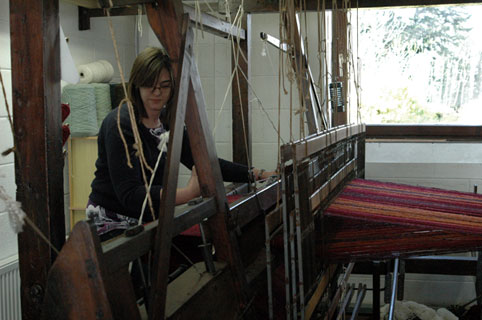 She has a beautiful old loom that she rescued from a heritage centre and weaves up fabric to turn into other things. She sells lots of scarves, wraps, stoles, cushions, handbags and other little tweedy items. Really lovely stuff! Clare also does knotwork (I think it’s called macramé) which is great for showing off ribbon yarn. We had a long yak about yarn – I figured she would be the best one to ask about getting wool in Donegal – and she passed me on details for Kilcarra yarns, showing me all the lovely shades they do. 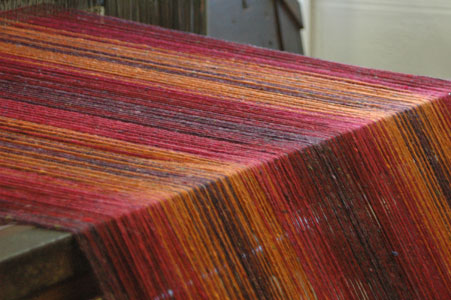 This is what she was working on Saturday

Encouraged by Clare, we continued on to Killybegs, where we had a B&B booked, and then further west to Kilcar. Kilcar is a funny little village where people not only double-park everywhere but just abandon their cars when things get held up. If you plan on making the trek to Kilcar for wool – and I recommend you do! – the Kilcarra factory is at the end of the village on the left as you come from Killybegs. Both the factory and shop, Studio Donegal, were shut on Easter Saturday, so we continued on our merry way out to Teelin where there are spectacular cliffs. We hiked around the cliffs all afternoon taking photos. I’ll share them with you tomorrow! Today, it’s all about the wool 🙂

We returned to Kilcar on Easter Monday on our way home. The factory wasn’t open but what seemed to be their factory shop, Studio Doengal, was. Unfortunately their site doesn’t do the place justice. They had every item of tweed under the sun, as well as the usual hand knits and fuzzy blankets. I even spotted a little single treadle Louet wheel for sale (about e240). They had a lot of tweed for sale by the yard, as well as a great sock of Kilcarra’s Aran Tweed. At e2.30 a ball, or e47 a kilo, I decided to stock up a bit. I have been looking for a nice yarn for my next knit out of Fitted Knits and I think this stuff will do the trick. 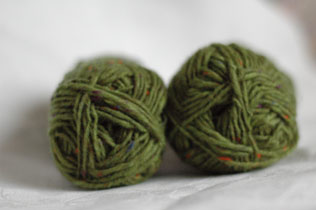 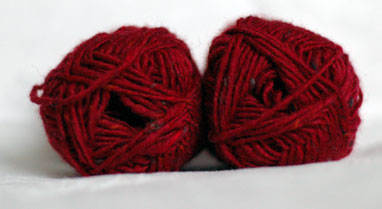 When they saw that I was stocking up, they offered to give me a shade card and said they were more than willing to do mail order. Great! I know the picture below doesn’t do justice to the shades but this stuff would be really great for some fair isle work as most of the colours are complimentary. 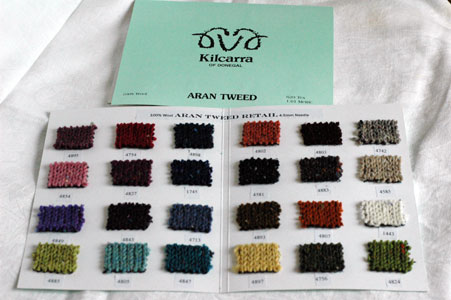 As we did a lot of driving over the weekend, I got lots of knitting done on my Puff Sleeved Cardigan. Here’s how far I’d gotten yesterday. 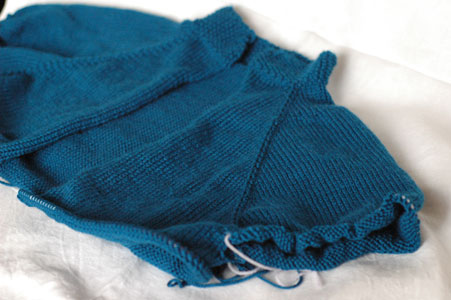 I continued further last night and am about to embark on the waist shaping. Happy days!