The problem with making Tuesday your favourite day is that Wednesday doesn’t know what to do with itself… today moreso than any other Wendnesday, because I was waiting around to have a Masterclass at 7pm. A masterclass is a lesson with a visiting teacher and is open to the public, so that everyone can learn from the teacher. Personally – and I know I shouldn’t even be saying this – but more often than not, masterclasses are extremely dull. It depends on the teacher, of course. The only teacher whose classes I really enjoyed is a guy I wrote to yesterday saying, pleasepleaseplease can I take lessons with you next year? My class this evening was pretty good – he asked me if I’d ever had a Spanish lover, for example – but most of the day was given over to not tiring myself out. Guess what that meant!

First up, Rod is nearly the same length as Tod. I dug out the body of this raglan and to my delight, it has a near-full ball hanging off it. On the downside, it needs another two inches added to it, so I probably will need another ball to finish the whole thing off. Oh well, nothing I didn’t know. 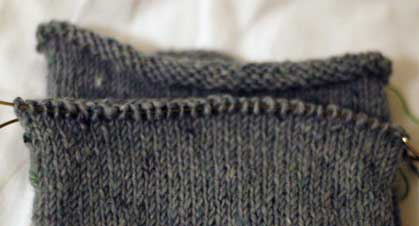 Last night I’d had enough of sleeves and made some progress on my Blue Cotton Vest. It is only the impending yarn shortage that is slowing this project down; I don’t want to accept it. I like it though, it will be a pretty top to wear when I get it finished. By the time it’s done, it will be warm enough to wear!

I don’t think swatches ever get as much credit as they should. I knit three swatches today – I frogged the first two because they just weren’t right. With gauge, it’s best to bite the bullet sooner rather than later. This is Jaeger 4-ply merino and I’m swatching for Thermal. A snuggly practical yarn for a snuggly practical top. I’m swatching in blue because that just happens to be the colour I have on hand, but I plan to knit this up in a mahogany colour. Mmmm white lacy camisole underneath with some jeans or a little skirt! 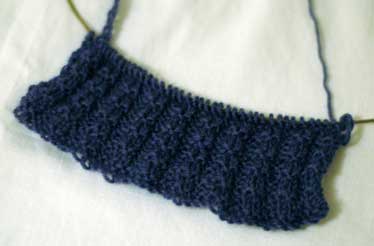 I’ve had this Jaeger in the stash for quite a while now. I originally bought it to knit up Rusted Root but I was way off the mark, both in yardage and weight. It was too pretty a colour and too useful a weight to return – I love knitting with 4-ply. There’s just enough bang for your buck! I’m going to use this colour for something else. Arisaig perhaps. Oh, while I’m on the subject, isn’t this a fun pattern too? 🙂

My sewing plans at the weekend were scuppered. My mum got a new sewing machine for Christmas and I wanted to try out the zipper foot. I’ve had a skirt pattern and material sitting in my room for over two years now so I finally got down to it last week and cut the whole thing out. I did a great job. I’m not usually the best with scissors in my hands (scar on schnozz to prove it!). Saturday afternoon rolled around and I got my skirt out to get Mum to show me how to set a zip properly. Disaster! I had cut out two back pieces the same, instead of mirrored, so I was actually missing a piece. I had to leave it. I got my mum to show me how to take up trousers instead. I bought two trousers in Dunnes recently and they’re too long, so today I took a pair of them up to wear to my class tonight. Result! 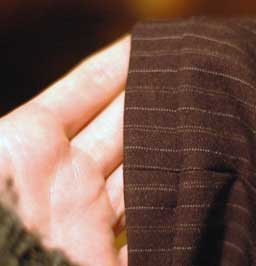 My machine is quite old. I bought it second-hand and it doesn’t have many features. However, it has the essentials – regular straight stitch, zig-zags, it can do a hem stitch which took me about five years to figure out, and today I found out that it has a little reverse stitch button. I’m not even going to try to explain. If you know what it is, great. If you don’t, you’re missing nothing.

Did you hear that Debbie Bliss is coming to Yarn in Galway?! She’s coming on February 5th (next Monday) and I would love to go, but I can’t. I half want to go and slobber all over her for being such a Yarn Queen but also half want to go and throw eggs at her (or balls of Rowan Calmer) for not putting schematics in her patterns. We all know I’d just slobber but who knows, I might come over all political and state my case for knitters worldwide driven demented by her magical-mystery-tour patterns.

And I have more news! I’m helping with another Beginner’s Class at This is Knit on Sunday week, February 11th. Check out details here if you are interested in coming. Be warned: it is a lot of fun for a Sunday afternoon (and better than putting up with The Match)!

Lastly, we all know and love Stephanie Japel of Glampyre, right? She’s got a book coming out called Fitted Knits and you can have a look at it here.

One thought on “An odd sort of day”