Hello! I think Tuesday is my favourite day of the week. I didn’t work this out logically; I think it’s an instinctive thing, because Mondays are usually horrendous. What makes this even more illogical is the fact that they’re actually not that horrendous. Hmmm, I’m confused now. On to the knitting…. I have christened my sleeves Rod and Tod. 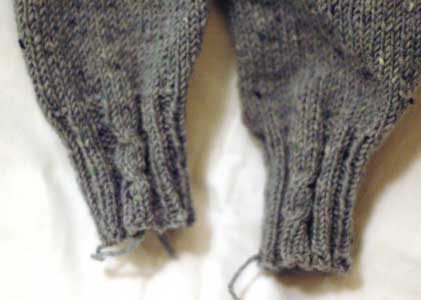 Daddy, when will we have hands?

I have made my peace with sleeve knitting. It’s really not so bad. The knitting-hat-for-snake mentality helps alot. If you ever get stuck on Sleeve Island, try it (unless you’re Ophiophobic, in which case, try those tree-trunk scarves I’ve seen knocking about in a few arty-farty magazines)(yes, I looked it up!).

Unfortunately there is no peace with the increasing worry that I might run out of wool. When I took up the first sleeve after Christmas to finish it off, I thought to myself, wow, I never knew I could get a 21 inch sleeve out of an 88 metre ball of wool! Today I realised that this is because I used two balls of wool. Two balls of wool for each sleeve plus five balls for the body only leaves one ball left to knit the entire upper section. Increasing worry, did I say? Make that a depressing, Dementor-soul-sucking, tea-made-but-no-milk-left fact of life.

No other knitting going on, mostly due to piano stuff. When it occurs, I just have to run with it. I’ve been learning this set of pieces, a set of Beethoven bagatelles, since about October. They’re for an exam in two weeks, but also for a competition in March. Playing pieces is like wearing a costume. Sometimes it’s a perfect fit, the costume becomes you. Sometimes, you can try to make it fit, but it just doesn’t work. Unfortunately in these sort of situations, wearing a snappy beret isn’t as useful as you’d think. I’m lucky because most of the pieces I pick and play do fit me, but sometimes I get unlucky. Then there are times when you know it fits, but you can’t figure out how. I have been playing these Bagatelles for months now and they’ve always been terrible. Terrible. But it’s amazing how being scared to death by a Hannibal Lecter novel in the middle of the night and crying your eyes out over Beethoven’s 7th Symphony on a Monday morning because (because? there’s no because! it was monday!) can make something click. Lol, I don’t know, I just play the piano!

In other news, have you seen the new Knitty surprises? My favourite is this one, half because it rules and half because I’ve been reading the designer’s blog for about a year now and I’m well impressed!

Want some free sewing patterns to download and sew yourself? Check out the Burda Style site. I’ve always liked Burda patterns because their sizes aren’t nearly as ridiculously small as the other pattern companies’. And if you’re into anything crafty at all, I came across Whipup today and it looks good. Check it out. And if you’re curious, or even just a little relieved that worms are the size they are, go read for yourself.

One thought on “Presents for everyone!”