I have a subscription to Vogue Knitting magazine and have found them easy to deal with. When I first ordered my subscription last summer, I managed to order it twice by accident, so I was charged for it twice. I wrote to them and they sorted it out for me, no problem. Since then, I have had no reason to complain. However, when I returned after Christmas, I realised that they hadn’t sent me the Holiday or the Winter issues. I was a bit confused as to whether or not I was entitled to a Holiday issue – Interweave Knits also brought out a Holiday issue, but it was a ‘special’ and was not mailed out to subscribers. So, I emailed Vogue and told them that I hadn’t received my Winter issue, and I didn’t know whether or not I was entitled to a Holiday issue. They replied and said they would look after it. And lo! Three magazines came through my door this morning. 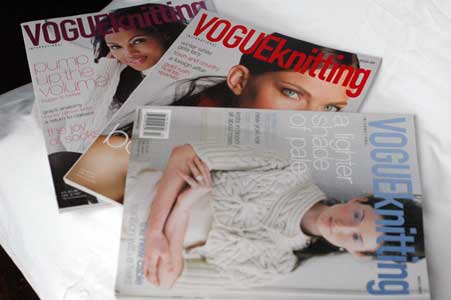 Left to right – Fall ’06, Holiday ’06 and Winter ’07. I don’t know why they sent me the Fall issue because I’d already gotten one. But I have it and it’s in pristine condition, so if anyone would like to buy it off me (€7), they’re welcome to it. Let me know.

The knit goes on! The pastille socks are nearing completion. I finished the leg and turned the heel on the second one yesterday. 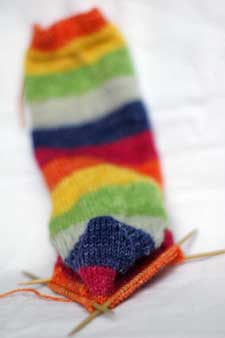 And ‘inspired’ by the Arctic winds outside, I cast on for my first mitred mitten last night. I started off with an i-cord cast-on (not hard) in my contrasting colour, cream. 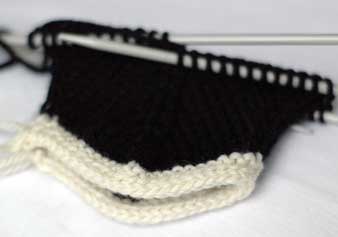 Smiling Mitten says: “Give me eyes!”

I kept on knitting – it really sped along! The interest of the mitring and the fact that the wool is quite chunky both helped. Once I got past the thumb mark, I added in some cream stripes to highlight the chevron and give it a bit of interest. 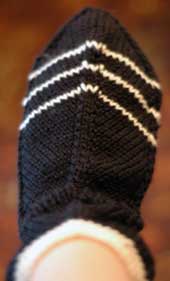 What am I missing?

I actually ripped out the body of the mitten about four times. Initially I used 5.5mm needles, and it was turned out too big. I switched to 4.5mm but it was still too roomy around the cuff. So, I ripped back and added in some ribbing around the cuff. Much to my surprise, it actually ballooned out a bit instead of nipping it in. Upon knitting it, I could see that the mitring made quite a stiff fabric and the ribbing was much more elastic. I ripped out the ribbing and re-knitted it using 3.25mm needles. Result! It works perfectly. 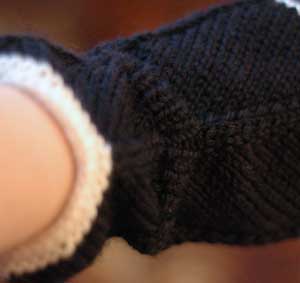 The pattern I’m using is from EZ’s Knitting Almanac and the yarn is Debbie Bliss Merino Aran. At just 78m per ball, I was afraid that I wouldn’t get one whole mitten out of a ball. It was this fear that led me to introduce stripes in the first place. But I had nothing to be afraid of! I have more than enough left over to knit the thumb in (anyone notice what was missing? :)). It’s an ill wind that blows no luck though, because the stripes look great. 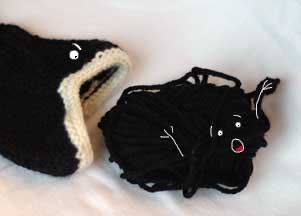 Yarn struggles to escape being eaten by mitten mouth

Mitten mouth. It sounds like some sort of dental condition. “Hello? Doctor? I’ve got mitten mouth.” “You’d better come in right away. Try not to bite anyone on your way here.”

2 thoughts on “A mitten”