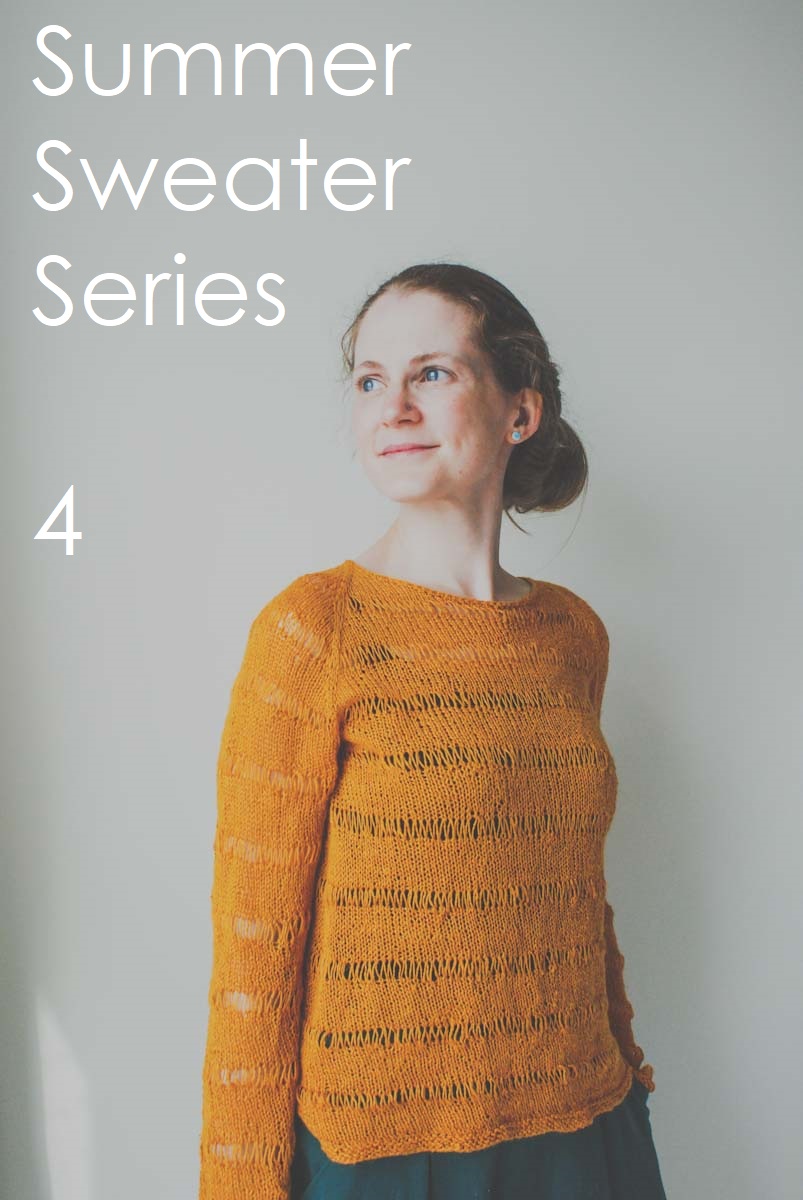 It is fitting to wrap this series up the week of the equinox! Here in Ireland, we have had a typically beautiful September so far, with misty mornings and warm afternoons. The evenings are starting to draw in again and my thoughts are turning now to woollier things. But before we move on, let us have one last hurrah for linen and the peculiarity that is knitting for an Irish summer.

This is a raglan knitted from the top down. Like the rest of the sweaters in the series, I used a recipe from Ann Budd’s book, Knitter’s Handy Book of Top-Down Sweaters. I am not sure that I will be able to go back to knitting from proper patterns, because I much prefer to go with the gauge that suits my yarn and I. (My yarn and I: The adventures we have! Coming soon to an unread paperback near you!)

I made quite a few modifications to the basic recipe pattern. For a start, I casted on the number of stitches at the neckline for the 34″ size in order to have a bit more room for the neckline. Because it would be a bit roomier, I didn’t worry about the cast on and used my usual cable cast on. I finished it off at the end with a round of single crochet. Nice and simple – and quick to put right if it goes a bit wobbly (mine often does). After the cast on, I worked a series of short rows across the back neck to raise it. You can see below that it isn’t noticeable at all, but if I didn’t do it, the whole yoke of the jumper wouldn’t sit in the right place on my shoulders, and be falling backwards. Weird, I know, but that’s just how it is.

The main reason I knit this sweater was to try out a texture of dropped stitches. This is really easy to do. Every time I wanted to work a row of dropped stitches, I went to knit the next stitch as usual, I wrapped the yarn around my needle 3 times (instead of just once) and then completed the stitch normally. On the next row, all the extra yarn reveals itself as extended stitches. You could really go mad with it and make them massive. I love how they create a corrugated effect on the sleeves, which you might see in the photo above.

After the cast on, I worked a series of short rows across the back neck to raise it. You can see below that it isn’t noticeable at all, but if I didn’t do it, the whole yoke of the jumper wouldn’t sit in the right place on my shoulders, and be falling backwards. Weird, I know, but that’s just how it is.

I worked only enough raglan increases to get to my actual size, which is about 32-33″. I was curious to see how the dropped stitches would affect the yoke depth and whether I would have to adjust my increases accordingly. Maybe it was because I didn’t need to work so many increases, but in any case, it wasn’t a problem at all – I was able to work the necessary number of increases without over-extending the yoke.

I finished the cuffs and hem with a few rows of garter.

This style of sweater has become quite popular for summer and transitional knits. I admit that I was heavily inspired by Perkin’s Cove and by Deschain. There were too many ‘buts’ to either of those patterns for me to freely cast on. Perkin’s Cove was knit at a gauge that I just wasn’t willing to go with, I wasn’t crazy about the double line of dropped stitches, nor the lack of neck shaping. Deschain was the opposite! Requiring a much heavier yarn, I really didn’t fancy knitting it for summer and the extremely oversized jumper trend doesn’t do much for me. But you might like the look of them, which is why I linked them here.