This morning, I attended a knitting workshop at Yarn given by Lynn Ross. She lives on the Isle of Arran off the coast of Scotland. I don’t know which coast and Google Maps isn’t doing me any favours! Funnily but unsurprisingly enough, tourists visiting the island wanted to buy aran knitting and, fed up explaining that it was a different Arran island, Lynn designed her own aran knitting and set up a site. Lynn’s background is in both knitting and weaving, but she is also into spinning and dyeing her own yarn with natural dyes. She showed us a lovely rainbow scarf that showed just how strong natural dyes can be. I find natural dyeing to be a fascinating concept, especially after listening to Brenda Dayne’s episode of Cast-On about her experiences with it. Unfortunately it would be just one hobby too many for me to get into right now!

There were three of us in the group. Liz was from Sligo and Bernie was from Galway. What I really liked about the group was that the three of us had different skills and wanted different things out of the workshop. Bernie was struck down by Knititis last winter and her condition is speedily declining. Horray! She has already knit a jumper and a cardigan and wanted to branch out a bit. She found a really lovely pattern from the Rebecca Mohair Special magazine for a diamond lace long wrappy-roundy garment. Lynn was able to help Bernie get started by walking her through the lace chart as a knitted sample.

Liz, on the other hand, had brought a pattern with her but didn’t want to knit it at the given gauge. The recommended needle size was 3.25mm for Rowan’s 4-ply soft. She wanted to use a larger needle which would help it work up faster. So Lynn helped her sketch out the basic design of the top, figure out the gauge of her new wool (Kid Classic – yum yum), and how to apply the new gauge to the design. I think Liz really got a lot out of the class and I hope she’ll take her knitting a step further with what she learned.

As for me, I honestly hadn’t given an awful lot of thought to the class because I was so busy during the week. I brought my vague idea of knitting an aran jumper with me and that was a bout it. I told Lynn about the bale of bánín I bought on Inis Mór and expressed my dissatisfaction with aran patterns out there. She said, well, why don’t you design your own? She had this marvellous pattern book by Sirdar from the 1960s with many aran patterns. I leafed through it and found a motif that I thought would look really nice as a central motif on the front. Unfortunately, the pattern wasn’t charted at all, so the only way I could figure out how the motif was written was to just knit the pattern. Luckily it was on a cardigan, with the same motif for each side of the front, so I didn’t have to cast on too many stitches. I spent the majority of the class working on this sample. After a break for lunch, I figured out what part of the written pattern was for the central motif, and wrote it down. Then I drew it out and flipped through a Harmony book of stitches for other ideas. I came up with a simple design of just two cables either side of the motif, and a honeycomb pattern on the outer sides of the cables. I was asking Lynn about the wisdom of putting in waist shaping. She recommended that I just make ribbed panels at the sides, which would give a natural shaping. Genius!

Just then, Ger came over with this.
I recognised it immediately and was astounded at my own stupidity: I own this book! I picked it up for cheap (like, e5) in a second hand book shop in Sligo over the summer! It is a compendium of aran stitches and patterns, and I’m told by Ger, very hard to come by. Crazy!

The end of the class came all too quickly and it was time to be on our way. We all thoroughly enjoyed the class – many thanks to Ger at Yarn for setting up the workshop and letting us run amok in her shop! Of course, I couldn’t come away without taking advantage of our workshop discount… I picked up some Debbie Bliss Country Tweed. This is spun by Kilcarra of Donegal and is right up my street. I love the colour and the texture. 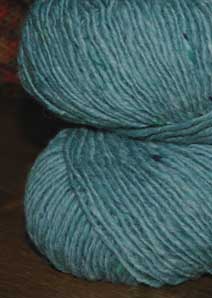 I just lovelovelove the Colinette they have in stock! I picked up some Point 5 because the colours were irresistible. I think a black hat, with this knitted into it in stripes (chevron?) , would be excellent!

I also picked up Knit Today and Simply Knitting. I’m going to have a read of them and see if they are Yay or Nay.

Here is a quick peek at my mum’s Clapotis. I have just passed the halfway point. 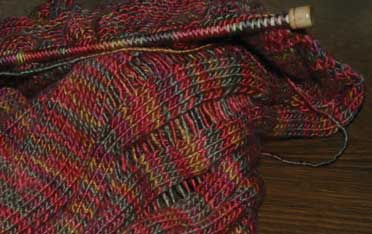 …and my everlasting Green Pomatomus socks! Nearly at the toe decreases here. I can’t wait to put these on, if only it being because they’re not on my needles anymore… 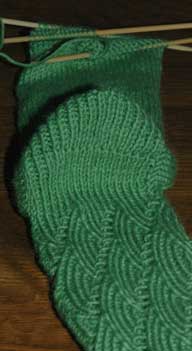 I feel super-inspired now! The good thing about knitting an aran jumper is that I’ll probably do it on 5.5mm, if not 6.5mm needles, so hopefully it will be a quick, well-fitting knit! Yay!

2 thoughts on “Day at the Wool Shop”