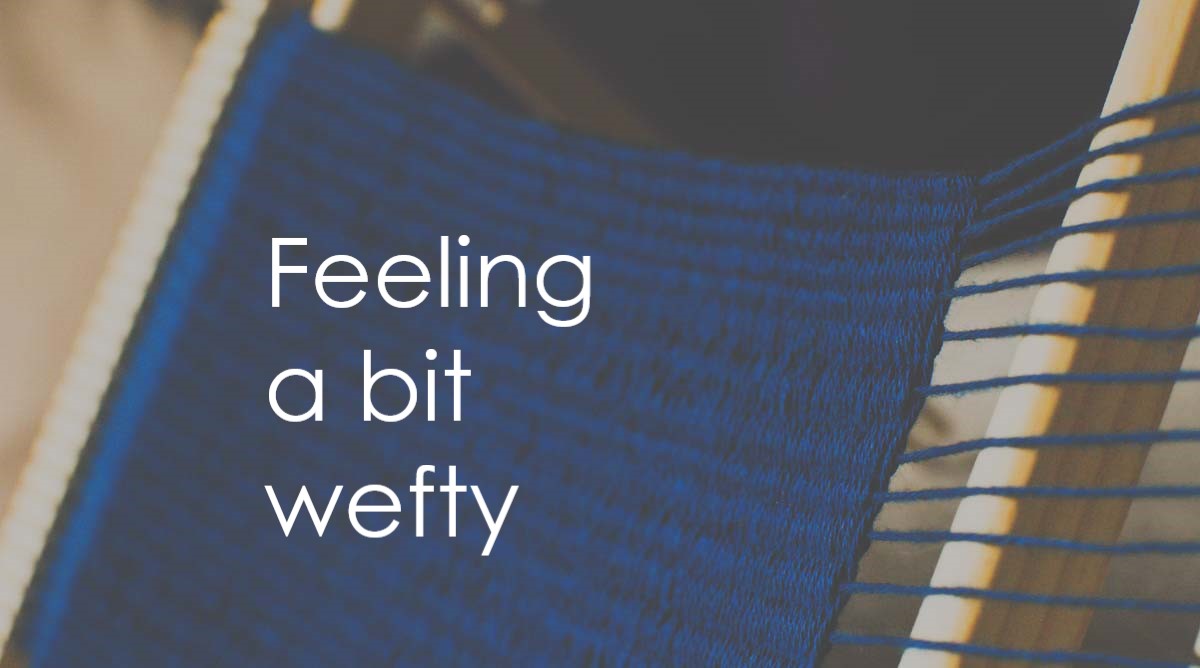 You may recall in a recent post a reference that I made to Kate Davies and the art form of inkling. Yes! You, too, may join me in rejoicing that having a vague idea about something has officially been recognised as an art form! We may then also rejoice together, though perhaps a little more subduedly, upon learning that inkling is also a type of weaving. Now, I will confess that I do not know very much more than when I first mentioned it, other than it is a type of weaving used to make long, narrow bands, such as those used for belts, and like all naturally intriguing things of this sort, it has a rich and widespread folk tradition across the world.

Now, I might be wrong, but inkling seems to be a pretty niche aspect of weaving, and whilst I do love a good rabbit hole as much as the next person, I thought that I would take the time to become a bit more informed before I went further. Last Spring, I had the good fortune to (a) find out about and (b) have the organisation to book a place in a beginner’s weaving workshop. It was run fully online by the Riverbank Arts Centre in Kildare. The irony did not escape me that, if it weren’t for Covid, I probably would not have been able to attend the workshop in person! It worked tremendously well. The tutor posted out our looms and yarn samples ahead of the first class. We had two, two hour sessions, during which we covered many different techniques, but it all felt very leisurely. I really enjoyed it!… and didn’t get a chance to get back to my little loom until now.

The main reason I took the class was to see if I would actually enjoy it enough to want to do more of it. Maybe it’s just me, but larger looms have that magnetism that I think large vehicles have to men. The fact that you can kind of sit into them, and speed things up by using your feet. It’s a bit like an aeroplane crossed with a pipe organ that makes fabric. What’s not to love!

I digress. I decided that I could do worse than getting a firm grasp of the basics on my little loom.

This was never going to be anything more than an experiment. I had no expectations whatsoever. I wanted to see what I could remember from the class, and I wanted to observe. I learned so many things from weaving this little thing! For instance, you can see how the selvedge on the top edge pulls in for that very fashionable parallelogram shape. (Who needs rectangles!) I realised about halfway through that how I aligned my warp through the little heddle had quite an impact on being able to maintain even edges. Once I corrected that, it was much easier to keep an even tension on both sides.

I have to say, I find a small charm in some of the missed strands and the occasional divot in the fabric. It was curious to me that, as I progressed, I couldn’t see the warp strands coming through at all. I have been reading up about it since, and I think it’s a combination of my tension and the yarn thickness. It is all very interesting. I cannot wait to try out more techniques and see what else I can learn. I don’t have any grand ambitions at all. To weave fabric to make a garment out of would be fabulous, but honestly, I find the mere act of understanding how the cloth is woven satisfying in itself.

The ends, though, are another matter entirely.