As promised! Let’s talk what was underneath my Abria the other day. 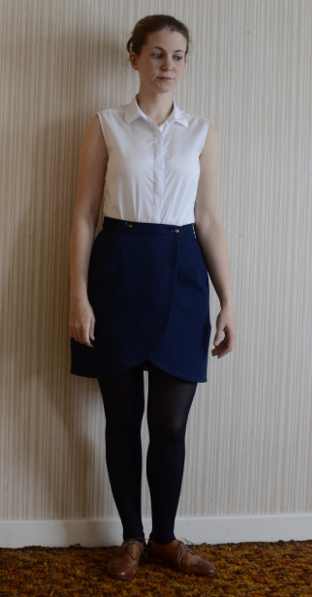 First up, the skirt! This is one of the more recent releases from Liesl+co, called the City Stroll Skirt. I made it out of some pretty ordinary dark denim I picked up in Hickey’s. It was about a tenner – I only had a metre so I forwent the facing, opting instead for a bias binding finish inside. 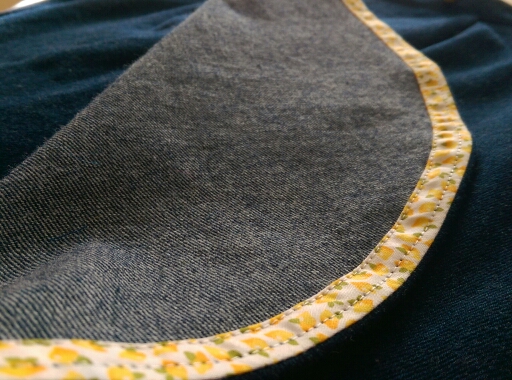 As always, the instructions are impeccable and everything matches up nicely. In fact, there is little else to say, except that this is one of those deceptive skirts in terms of length! It looks ok on the model, right? Even the pattern pieces look about right. But… I think I would like it a bit longer. I like to use my pockets, but unfortunately, very often, when I have my hands in my pockets, I still move them around. So, depending on what angle you face your audience, you could give them a very interesting accompaniment to your dialogue! I am a little annoyed, in fact, because I even wrote on the pieces to lengthen them by two inches, but in the heat of cutting out, I forgot. 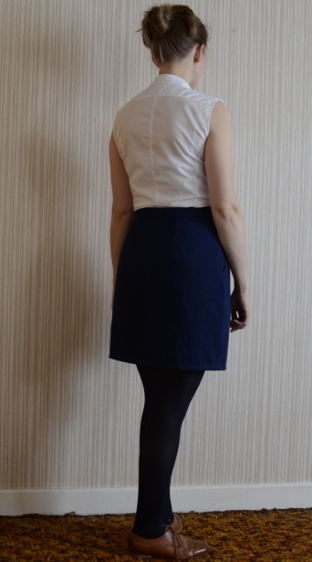 I love the buttons. I got them in Rubanesque about a month ago. They were selling all of their buttons at 50% off, so I doubt there are many left. 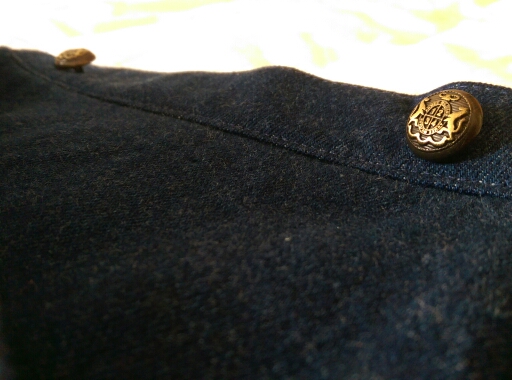 The blouse was one of those things I had on my list (you have one too? isn’t it funny how it can morph from being inspiring to overwhelming to redundant back to inspiring in just one sitting?) but almost didn’t get to. I got the pattern, Burda 6810 at the beginning of the summer. It has two winning aspects: multiple sleeve options and a covered button placket. I might be a little crazy but when you’re wearing a blouse under a close-fitting sweater, the covered placket prevents the buttons from showing through the sweater! Anyway, I had barely a metre of white cotton voile left over from another blouse I made, and I thought it would be good to see if it fit. In any case, the more I thought about it, the more I think a sleeveless blouse is useful for layering under dresses. I love long sleeved dresses, and I love the look of a collar underneath, but I don’t ever wear the two together simply because of the bulk of wearing a blouse. Doesn’t this solve this problem?

Don’t let my glowing countenance fool you…! I’m actually not thrilled with the blouse. In fact, it pushed me to face the fact that I needed to learn how to make a full bust adjustment. I always need a little bit more room at the front, even when everything else – shoulders, waist and hips – fit just fine (as you can see). Any minor pulling you see would be fixed by this. So… I spent the princely sum of e6.50 on 1.2m of white polycotton and thirty minutes doing a little research for another version. It’s actually not that hard at all. I cut out a new blouse and hopefully I will have an idea of the fit in a day or two.