I adore this time of year! It is a time for fresh beginnings, new leaves, revised strategies and revitalised plans! The summer was a busy one for me – lots of playing and not much else. In June, I competed in another competition outside Milan. Amusingly, many people there knew each other from other competitions, and I met a few who had been in Taranto with me. I had mutual acquaintances meet at later competitions. The music world is very small, even on an international level. Again, I was eliminated but had the opportunity to speak with most of the jury. This was quite revealing. I learned that juries, by and large, want to hear standard competition repertoire – you know, the big, heavy, flashy stuff – and absolutely do not want to hear a piece that they do not know. I was told by one jury member that a piece I played – which is ferociously difficult, by the way – was not competition repertoire. I told her that I didn’t pick it for her, I picked it for me. This had an amusing reaction and our conversation did not last much longer.

I learned two other things. Firstly, it is a deeply chauvinistic world. As a woman, I cannot see how it would be possible to please a jury. If you play in a masculine style, it just doesn’t have the same effect as a man playing. If you play in a feminine style, it’s too ‘weak’ (big repertoire etc.). It would seem that you would need the magical combination of a good repertoire choice, a pleasing style, and the jury on your side to progress in any way. Secondly, it is an ageist world. They will always give the younger musician a prize in order to help a career. So, in both competitions, I saw young Italian men win quite a few awards when there were umpteen other pianists more worthy. I quickly saw that as an older woman, my chances of even progressing to the next round were practically nil! But I also saw that this had nothing to do with how I played! I think that if I were younger, this would infuriate me, but I have done enough competitions to really not care anymore. It was a fantastic experience and it gave me a huge confidence boost, funnily enough.

The rest of the summer was busy, but fun! I went back to Switzerland and played a Mozart concerto with the orchestra there (it’s a music course where you can play with orchestra). And then, when I returned, I played ‘Rhapsody in Blue’ with the Irish Youth Wind Ensemble in the University of Limerick concert hall. This was an incredible experience – such an overwhelming level of talent in the ensemble! – and I look forward to sharing the recording with you. I was really very pleased with how it came off.

I have even more news! I got a new job in a university. I used to work there a few years ago so I am delighted to be returning on a full-time basis now. I have a contract but I am hopeful that it will develop into a more permanent position. There are two aspects of this that I am thrilled about: working daytime hours and a short train commute. I have worked vampire hours for the last few years and let me tell you, it wears thin. You never get to go to concerts or socialise at normal times. As for the commute, I have the perfect combination of a little daily exercise getting to the station and KNITTING TIME!

This brings me to the most important part: actual knitting! I have a completed cardigan that I will show you shortly, but today I have a WIP and future plans to share.

First up is a round yoked sweater in Fyberspates Cumulus. I adore the shades of this yarn. One of my most-worn tops is a similar colour to this, so I thought a cropped pullover version would be useful. 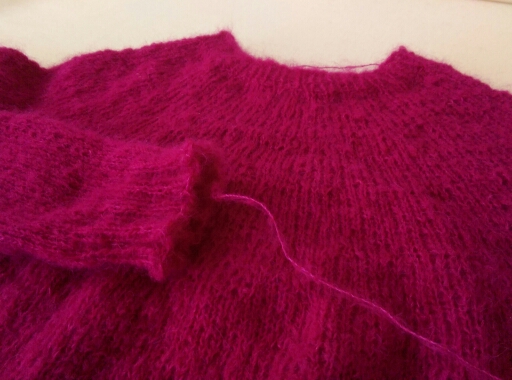 The pattern is the Basic Unisex Pullover from Hannah Fettig’s Knitbot Yoked. This collection of five yoked sweaters (with a bonus hat and mitts) sat in my shopping cart on Ravelry for about a year. I finally broke down and bought it. I want to knit them all! In fact, I have a lovely dark teal yarn that would be perfect for Kaye’s cardigan. Would those little dots be perfect in angora or alpaca? Something sort of fluffy?!

I am almost finished the second sleeve (sleeves! Ugh!) and I have my sights on the next item. Are you susceptible to bizarre, but unmoveable desires like me? I bought a short sleeved ribbed sweater from Gap about three years ago. It has diagonal shaping on the body and I love it. I have searched high and low on Ravelry for a pattern for something similar to no avail. Until I found Newsom! I have this Donegal tweed 4ply/sport in my stash for over a year now (maybe two years?) and I am dying to use it. This will be the perfect pattern to show off its tweedy goodness. 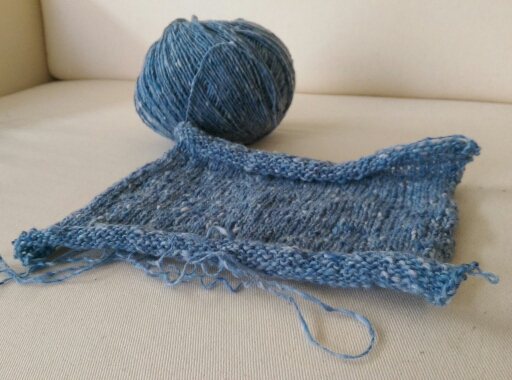 Don’t you love when you knit a good-sized swatch, lay it down, steal the needles for another project, assure yourself you will totally remember what size you used, then totally forget, thus rendering the swatch useless? I love that!

Lastly, I have a deep need for cream cardigan. I have a fair few dark dresses and skirts and this would fill a considerable wardrobe gap. This is the Cushendale Mohair Boucle. Isn’t it awesome? I love how loopy it is. It isn’t at all annoying to knit, either. I don’t really have a plan for this one. I changed needles quite a few times on this swatch just to see how the textures would change. It could take quite a large needle. I think perhaps just a simple round-necked cardigan would do it, with garter borders. 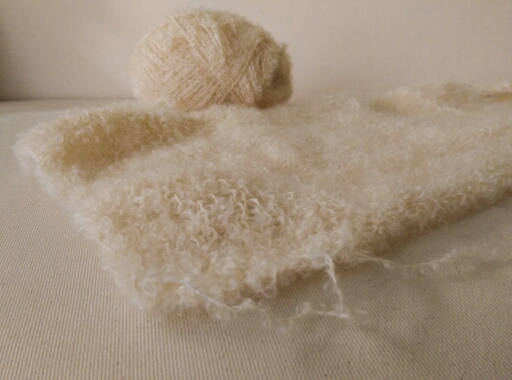 The other publication I have been sorely tempted by is a new offering by Elizabeth Doherty, called Top Down: Re-imagining Set-in Sleeve Design. It’s about $25, which isn’t cheap, considering there are only 6 patterns, but by all accounts there is a wealth of information contained therein. I am a long-term fan of the top-down set-in sleeve but there are issues with matching the look of picked-up stitches. I’m not convinced, either, by the look of the contiguous shoulder. I will think about it and get back to you.