It’s been a long day, but a good one. I got up at 6am to get a good amount of practice in before the bus and it went really well. Work went quickly and wasn’t too dull, and when I got home there were some surprises waiting for me in the porch! My last parcel from my secret pal arrived, as did the books I ordered from Amazon. Get your bibs on: it’s drool time.

Check out what Robin sent me. 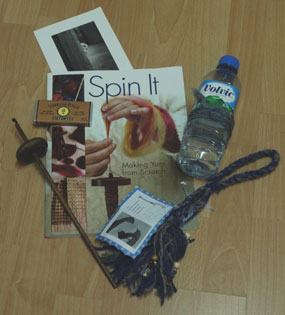 Clockwise from the left: A skein distaff, spindle, delicious-smelling chocolate, fun card, Interweave Spin It book and guide to spinning, Volvic bottle holding my first spinning attempt! A skein distaff – or braided dangly thing as I so eloquently put it in my thank you email to Robin – is used to hold your bunch of fluff (roving) while you’re spinning it up. It’s really handy because as I quickly learned, it stopped the fluff from getting stuck into the bit that you’re spinning. Robin had the spindle set up for me so I could give it a good go when I took it out lol… here is a better look at my attempt.

This is a close up of the distaff she made me. Isn’t it cute? There are little beads and charms in it too. 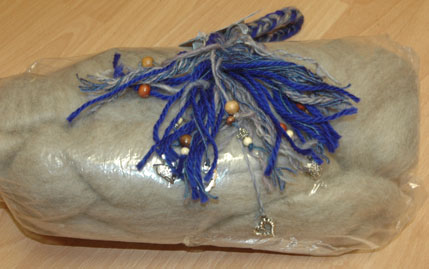 In the background there is a glimpse of the really big bag of roving (fluff) also included for me to get cracking straight away. The label says that it is Light Coopworth. I don’t know much about spinning but I have read enough to recognise the name 🙂 I have already spun a bit of it and it is really nice to spin with. It’s not all the same width and alot of it is quite knobbly but I am determined to persevere. It is a really nice colour!

Everything about this package was lovely, even the wrapping! 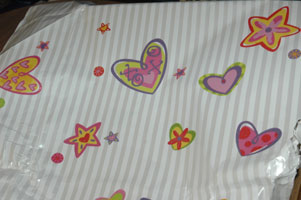 Isn’t it pretty! Thank you so much Robin! It was lovely being spoiled by you and I hope we keep in touch!

Here are some of the books I’ve acquired lately. I am really stashing up for the coming penniless winter lol… 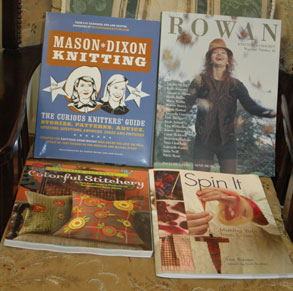 The Rowan 40 magazine I received from Yarn last week, along with Rowan’s new book, Felted Knits. Many thanks to Yarn for their speedy response! I ordered the books on Monday night and received them on Wednesday. I really like the new Rowan 40 but am being very restrained and haven’t added any new projects to my to-do list — yet! I got Mason-Dixon Knitting and Colorful Stitchery today. I have been longing for the Colorful Stitchery for a long time now and am really excited about getting some crewel-work going. There are some patterns from her very funky crewel-work kits in the book, which delights me. I have such a desire to make some funky cushion covers for my sitting room! Mason-Dixon looks like a really comforting read. I don’t think I’ll jump on any of the projects, but it is well-written and has lots of interesting tit-bits to dip into. Perfect bed time reading! As for the Spin it book, I am bringing it with me to work tomorrow!

Last but not least, here are some progress photos! I finished my first Pomatomus sock and have already started the second. I figured I should keep the delay between the first and second sock as short as possible to prevent the onset of SSS! It seems to have worked. 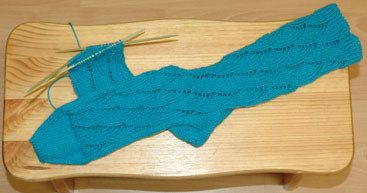 I managed to finish the Left Front of my Granny Smith there on Sunday, and have already gotten a good bit into the Right Front.

I have some bad news about the weekend. Well, “bad”. I had my lesson on Saturday morning, and it went really well. Unfortunately, during the week, I’d been having awful trouble with my wisdom teeth. I woke up on Friday night in excruciating pain but managed to fall back asleep again. They were still bothering me on Saturday but I got through my lesson ok. However, when I got into town at 12pm, I didn’t feel like doing anything at all. I had a look in Easons, had my lunch and was terribly glad to sit down on the 2pm train home. It was much earlier than I’d planned, and I didn’t get to the Library Bar knitting meet up, or out to This Is Knit. The upside was that I got home really early and got lots of practice in before Alb came up and we went out to dinner. Even though it was a good plan and I was excited about it, I was just too uncomfortable with my teeth to enjoy the day. They seem to have settled down now though, thank goodness.

Whilst in Easons, I picked up a new magazine called Knit Today. I like it because it has a good mix of patterns and articles. It has more articles than any other knitting magazine I’ve gotten recently. I’ll be interested to see how the magazine develops, and it’s always nice to have another magazine to look forward to each month. Speaing of magazines, I decided to splash out on a Vogue Knitting subscription. I was surprised to see that four issues (ie, one year) was just e23. So, I put in my order. The site said I would receive a confirmation email, but I didn’t. Unfortunately I didn’t have the sense to wait and see if it would be debited from my credit card (3v) and placed another order. Imagine my delight when I found on Friday night that I’d been charged for two subscriptions! I emailed them through their site but wasn’t very reassured considering I hadn’t gotten any confirmation email about my subscription so far. However, today, I received an email from a person (not just an automated response!) which acknowledged the error and said that the extra money would be credited back on my card. Yay! I am glad it got sorted out. I figured, if it didn’t work out, I could always sell the subscription on to another Irish knitter and just change the delivery address. After all, e23 isn’t going to break the bank.

What a lot of news! I will be back in Dublin from next Monday for good so expect lots of progress pictures and stash bragging 😀 In the meantime, happy knitting!

One thought on “Much to tell”