I did not anticipate making this outfit by ANY measure. 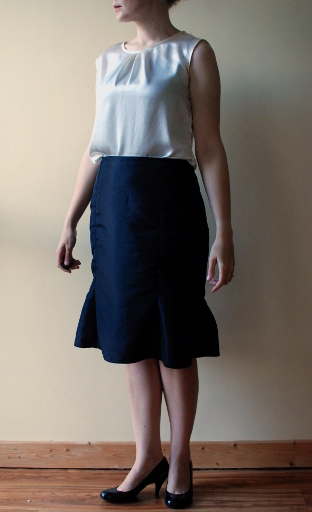 I am quite proud of this ensemble as it was partly of my own design. The skirt I drafted on a whim. It was something I’d intended to make during the spring and I even bought the fabric for it. It was inspired by a skirt I had made for me almost ten years ago (that unfortunately no longer fits me… in the good way, but still). It was very easy to make: I made my basic skirt block and then traced off the princess panels, adding an estimated amount of flare to the hem. I made a muslin and re-drafted the pattern slightly to include a deeper and wider flare at each panel. Because it’s just taffeta, I didn’t bother lining it but used a facing instead. I serged all the insides and, after an infuriating half hour trying to turn a tiny hem, used the rolled hem feature on my serger too. Very satisfactory. Not the finish for every sort of material but in this instance, it was perfect. 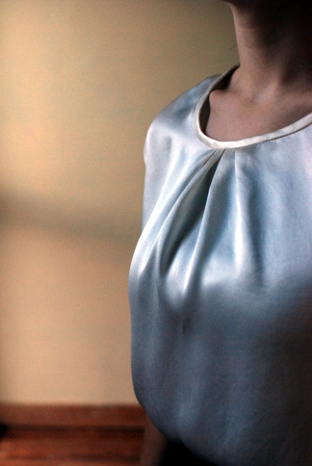 The basis of the top, as I said before, was a Burda magazine pattern I’ve used a number of times before. I altered it to eliminate the dart and include pleats at the neckline. I love how it drapes and I think it shows off the posh fabric to its best! My main reason for finishing this outfit up quickly was because I had another recital last night. I ended up not wearing it because the venue was positively Siberian and I retreated into a long-sleeved dress instead. However, it is reassuring to know it is awaiting me on the hanger!

The details… I used 1.5m of taffeta for the skirt, which was no more than €15, bought from the fabric shop on Parnell St. The silk for the top was 1m of bridal silk marked down from €60 (!) to €20. I had enough to make two lots of bias binding for the neckline and sleeves – I seem doomed to always cut the wrong width. (Shoes are from Marks & Sparks, whom I adore as they do a size 3.5, a veritable unicorn in the shoe industry).

One thought on “September Outfit – for Recitals”