I’ve been busy guys! I had a recital in Sligo at the weekend. It was great fun but meant I was reasonably occupied and then a bit tired afterwards. I am about to start sewing a shirt for Alb but I need to cut out the pattern. Rather than start something different, I decided to go back to the silk top I cut a hole in. Once I abandoned the idea of lining it, it was easily remedied. Here’s how it was before I put on the armhole binding. 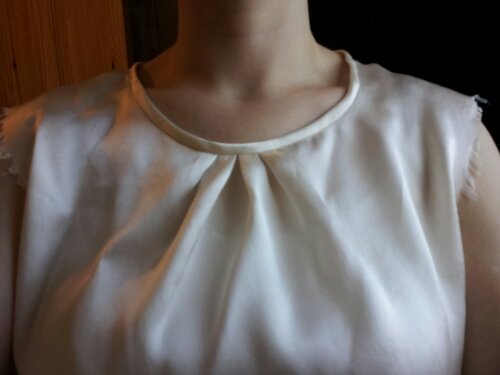 Whilst the pleats were a good exercise in moving darts on the bodice, I probably could have spaced them a bit further apart. That said, they drape quite nicely.

I have another recital on Saturday night so I’m hoping to have it finished by then. Other than that, I’m preparing in tiny ways for returning to work next week and trying to get some loose ends tied up, too. I had a list of house jobs to do that I just don’t have the energy for during term time – I’ve two out of three done. The third involves separating clothes and organising storage for summer/winter clothes. This is not a typically Irish thing to do but half of our wardrobe is taken up with seasonally inappropriate clothes at any one time. So, I’m looking forward to sorting it out.

When I haven’t been practising, I’ve been listening to BBC radio 4 on a live stream app I found for free. I find it difficult to get podcasts that aren’t infuriating on some level so I gave this a go: I’m hooked. I don’t really enjoy reading newspapers and struggle to find current topics that interest me. I now feel that radio 4 is like my own personal radio station. I have listened to programmes about Dr Martin Luther King, black power and its adjacent UK movement, food wastage and the new-ish movement of gleaning food from harvesting to use in various charitable ways, all manner of current UK affairs, The Archers, all about shale, discussions about whether consciousness is produced by the brain or exists externally… As someone with an insatiable curiosity for pretty much everything, I have found my heaven. My dear UK readers, you are probably rolling your eyes at my ‘revelation’ but Irish media is a lunar landscape in comparison to the mighty BBC.

In completely unrelated news, I was in town earlier today and left my bike (Bertha, complete with her fresh season of new flowers) locked at the GPO. I returned less than an hour later to find these in my basket:

Those vouchers that Boots give out when you buy cosmetics, giving you buy one, get one free, or better yet, a certain amount off No 7 makeup. Whoever left them, left 3! Since my basket is occasionally used as a bin, this was a wonderful surprise. And looking around, mine really was the floweriest of them all so I guess they assumed correctly! Thank you, stranger!