Switzerland came and went – this was my third time now so it was much, much easier. I know the airports, train stations, town plans, where to eat, where to shop, all the things that take up time and mental energy. As always, we all had a great time. I met lots of new people and made new friends. It was the first occasion I had prepared work pretty much all by myself without much external input so it was rather gratifying to see that work out as I intended. I have some video of my concerto performance but I am still trying to figure out how to extract it from the clutches of my phone! When I do, I will try to find a way to share here.

Since my return, I have been split in three ways: practice in preparation for some small things I agreed to in September and October, knitting and sewing, and attending to the summer list of chores. You know those chores. The ones where, during the year, you open the door, throw something in and quickly shut it again. I’m doing pretty well on all fronts. Since I’m quite sure you don’t want to hear about how OCD-fulfilling I find practising with my eyes shut or how I spent an entire day covered in dust building shelves, here is some crafting news…

I spent a decent amount of time swatching, mocking up patterns and cutting out. Most of this resulted in the answer, no, this won’t work. I was hoping to get a wearable muslin out of my first Archer shirt but it’s too small across the front. Perfect everywhere else, though, so I cut out a revised version from some light blue chambray I’ve had for a while. I fell foul of two summer sales; one at Fabric HQ where I bought this lovely tiny floral print, currently cut up into a short sleeved blouse…. 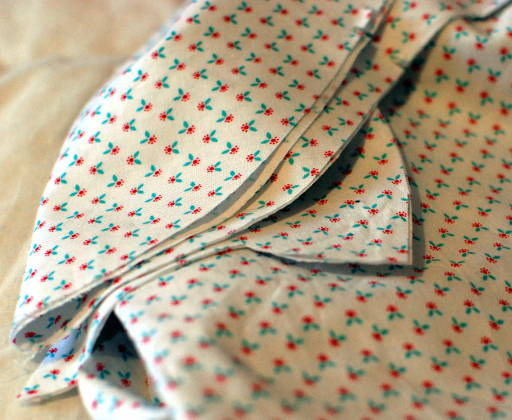 …and this marvellous white-on-white cotton, which is slowly making its way into the world as a pleated skirt. 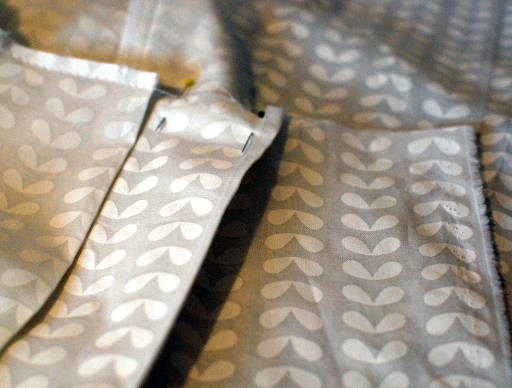 I would normally have finished this in two sittings but a few things held me up. Firstly, I wanted to have a side zip but also pockets. Although manageable, this takes time. Then, when I was pressing in the pleats, I noticed that the fabric is extremely see-through. I dithered over what kind of lining to use. I could use an acetate, which works well if I wear tights but is horrible against the skin. I could use a cotton voile or gauze, which is nice against the skin but sticks to tights. The optimal is silk something but silk satin is very expensive, so what to do? While I dithered, I started working on a green silk Pendrell to go with the skirt. I’m recycling this, which was a bust and I never wore. Anyway, I was in Hickey’s for the second sale I mentioned, when I overheard a funny conversation. A woman wanted to cover lampshades in silk but didn’t want it to be expensive (?!). After refusing many types of silk, the saleswoman dug out some silk habotai lining. At €9.95/m, this was acceptable to the woman. I was standing at the counter with my red georgette, looking at this lining and knew that I, too, had my solution. It’s pretty sheer but it does the job. I hope to show both soon! All they need are hems and hooks and eyes.

So, that red georgette. I went into Hickey’s to see what was in the sale. I cannot explain why I always want to make a summer dress in August but here I am again. After much mulling, I decided to go with Hazel because I love the way the shaping in the bodice can be illustrated with stripes. I was after a cotton or linen something with stripes; I found a cotton ticking for about €9/m in the sale. While I was there, I spotted the red georgette. It’s polyester and is like a crepe, with a matt dimpled texture and a really good, grippy drape. I got 1.25m and I am 99% decided on a pattern. 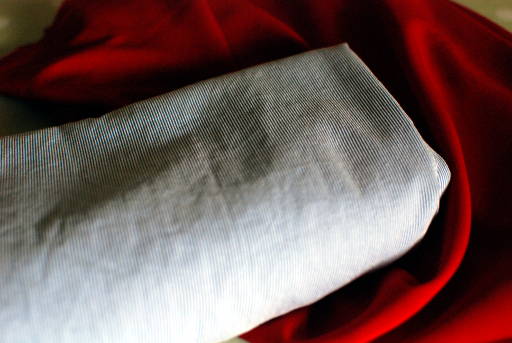 The knitting has been disappointing. I spent a lot of June working on a black cardigan only to run out of yarn a whole sleeve to go. I got more but naturally, it’s a different dye lot. I was really hoping it wouldn’t show but it does! It totally does! I have two options. I could try and hunt down more of the original lot on Ravelry… or I could rip it out and knit a different pattern with less cabling. I think I will rip it out because even though I am only one sleeve from being finished, I’m not really in love with it. Facing this reality means that I am not that upset about the prospect of ripping it out. In the meantime, I’ve cast on for a pattern that I’ve loved for years – Helene from Quince & Co. I gave it a go when it first came out but poor yarn choice meant that I never completed it. This time, I’ve gone with the original linen recommendation. I’m using this, Katia Lino in ‘Biscuit’. I think this is the first time I have ever washed a swatch… but it was very revealing. A typically scratchy, stiff swatch… 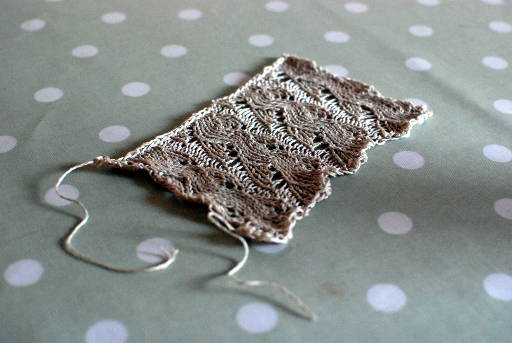 …was transformed into a drapey dream.

Looking forward to sharing the skirt and top soon!