Let’s do the insects first. I found this marvellously soft material in Murphy Sheehy’s a while back. I think I showed as part of my summer sewing plans, with the original intention an Archer shirt. Further examination showed that the fabric not only had alot of drape, but alot of stretch also, so I decided against the shirt. I made another Scout tshirt instead with the same modifications as before. 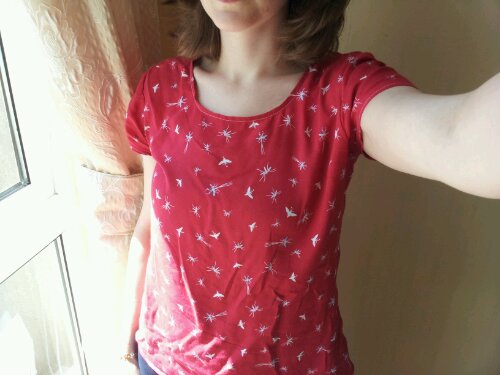 Sorry for phone photos, I’ve been too busy to get out the tripod!

This shows the print better. 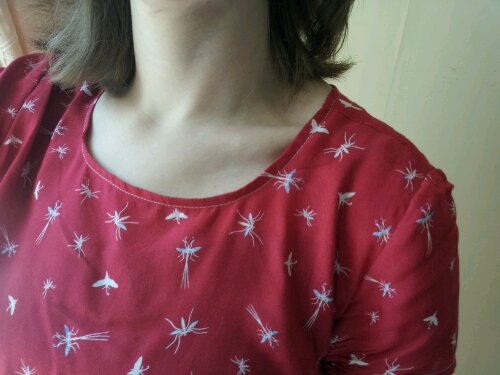 Maybe the fabric would have been a bit weird as a long sleeved shirt!

I have been making far, far more than I’m able to keep up with. I made a travel bag (for shoes or ‘delicates’) from a really fun dancing bears fat quarter I had lying around. I finished the outfit I was talking about the weekend before last. I will photo this better and talk more about it as it has a little story attached! 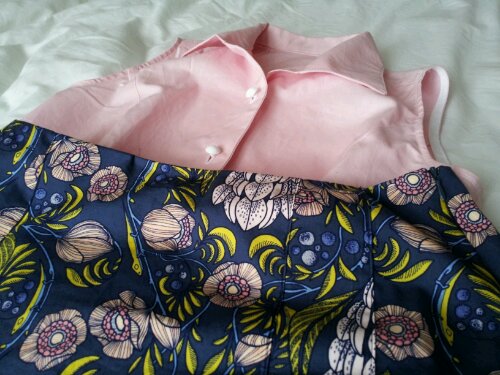 I finished my grey Biston shrug, which was like an elephant’s trunk near the end, as well as a lace shawl in the new (well, to me) Silkpaca from Malabrigo. It blocked out so nicely.

As for the red zip… I don’t know about you, but sometimes, when I’m buying a zip for something else, I’m inexplicably drawn to zips for other things. Open-ended zips. Boring nylon zips in odd sizes like 15″. Those thick, stumpy jeans zips for trousers. And then, there are the fun zips. Orange, blue, yellow, red…what could I make with a zip like that? I think. That’s how I came home with a red zip. I was thinking, red shorts with a white top and navy shoes. After some thought, I came to the conclusion that a red skirt is far more useful than red shorts (I made a red skirt last summer but rarely wore it for multiple reasons which I will divulge when I finish the New Improved Red Skirt). Of course, I took some of that soft, gauzey white shirting and cut out a Laurel blouse to go with it. Then I remembered some fantastic bias binding I have that is white with red cherries! I can’t wait to put the while thing together.

There you have it. That is how I fell down the rabbit hole that is buying a red zip. You’ve been warned.

One thought on “Insects and a red zip”