It’s always good to catch up! There has been a lot of knitting but not much opportunity to share it. This is mostly because I am always in a big rush in the morning and by the time I get home, it is far too dark to take photos. It was a close thing today! Between sleeping in (for which I have a new-found love) and the fog, I was nearly caught out again.

Anyway, I have some hats to share. First up is Quincy from Jared Flood’s Made in Brooklyn. 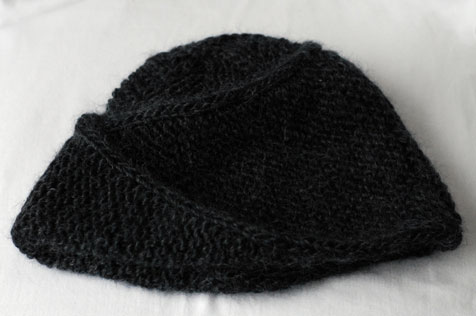 This was a quick and addictive knit because it uses chunky yarn (I used some leftover Rowan Cocoon) and garter stitch. 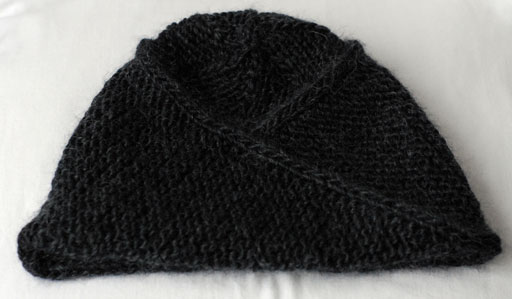 You can see how the main part of the hat is twisted – very easy to do and very effective! This is a bit loose and short on me, giving a mushroom effect, so I think if I were knitting it again I would use an aran weight yarn and cast on more stitches to make it longer. The book itself is lovely – sort of next generation Elizabeth Zimmermann – and there are a few more projects in it that I would like to make. (I have one lined up for Christmas, actually!)

Next up is a hat made from Game Knitting. This is a fabulous wee booklet I found via Ravelry. It has some patterns but mostly it explains the concept and gives lots of examples and ideas. I knit this hat while watching football and NBA. It’s just a regular 2×2 Rib hat but I changed the pattern when the ball went out of play. It gives a fun regular-random flow to the hat. 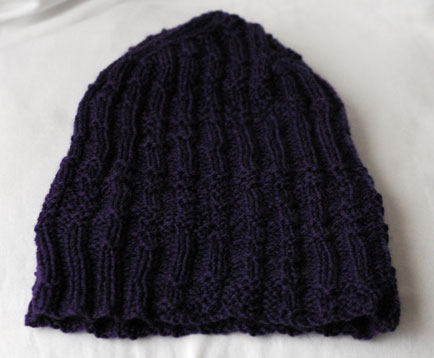 If you like the sound of this, I definitely recommend the booklet for loads of ideas!

So Alb’s Jumper has been growing gradually but it still just looks like a grey blob, I’m afraid. Not wholly unrelated, I caved and cast on for Girl Friday… 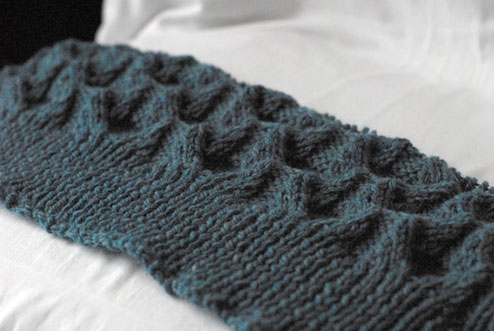 … which is knit out of Garnstudio’s Alaska, the same stuff I knit my Liesl out of. I wasn’t really close to gauge so I did some maths and figured that I could get away with knitting a size smaller at the gauge I had. It looks ok so far!

I was in This is Knit yesterday between lessons and I picked up some of this dreamy stuff. 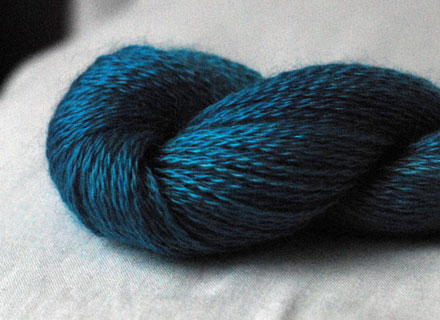 It’s Wagtail 100% mohair. Shockingly, it has been more than two weeks since I knit a scarf or shawl. This ought to be addressed right this instance! (I am also right about to cast on for a Central Park Hoodie for my mum and also a Hemlock Ring Blanket thanks to seeing Dixie’s amazing sample in the shop yesterday… and also… well, maybe another day!)

He fully accepts liability. I am pretty sure he is unaware of the term ‘boyfriend sweater curse’ but the notion is not alien to him. In his words, I knit him a jumper, he doesn’t like it, he doesn’t wear it, I get mad. However, I have some things working in my favour: I can’t stay mad for more than five minutes, I just want something to knit, and we have just cruised into our eighth year of going-outedness and we have never really broached the subject.

But… the subject had to be broached when it became painfully obvious that his favourite – and only – warm jumper is past its prime. It was christened Sheep Jumper many moons ago but I don’t know why. It’s made from a warm, shaggy synthetic and is beige with dark beige stripes on the cuffs and hem. It doesn’t look anything like a sheep. I think perhaps his presence around so much wool had a subliminal influence. Sheep = wool = warm? After many unfruitful shopping trips to replace Sheep Jumper I tentatively suggested I knit a replacement… which finds me cranking out a dark grey superwash this weekend and praying that it comes out in even a somewhat humanoid form.

Needless to say, the back of a dark grey stockinette sweater doesn’t lend itself to photography in the middle of November but it does lend itself to reflection upon the recipient. Shouldn’t I have started small? you wonder. A hat or socks or something? Tested the waters? Well, in my book, this is what gets you a jumper:

1. He not only eats my cooking but often compliments it.

2. He drives me around and rarely objects to a wool shop stop unless he is keen on “making time”. (I never “make time”.)

3. He uses logic to calm knitting rage. For example, if gauge is consistently cranky and insists on ruining not one, but four attempts at a jumper, he will suggest soothing solutions. These include increasing swatch size because (get this) a small swatch results in a large margin of error!

4a. He likes the knitting. He has absorbed so much terminology at this stage that he is prone to saying things like, “I sat on your double points but they seem ok” or “Is that a mitten or a sock?”. The understanding of said knitting greatly increases his sympathy when things go wrong. For example, the other day, I was knitting a colourwork hat. After about two inches it became apparent that it was going to be very small. I pulled it off my needles, frowned at it and tried to stretch it out. He said, “Oh no. What’s wrong?” I said, “My hat is too small!” He said “Oh no… I thought you were knitting the cuff of a sleeve!”

4b. He brags about the knitting. We were visiting friends last night and when I pulled on my mittens as we were leaving, he said, “See those? They’re like the fine china of knitting!”

5. The knitting allows for far more football and basketball watching than would normally be tolerated. This isn’t necessarily a bad thing as I get lots of knitting done. I usually just listen to the commentary so I end up taking in far more information than I want to, which in turn means that I can have an in-depth conversation about the Premiership… without having any true interest in it at all. The basketball, on the other hand, has a lot to answer for. It seems I have become a die-hard Toronto Raptors fan.

The one thing I love about studying and working as an accompanist is the variety of work. For example, I’ve got competitions and concerts coming up for violin, flute, bassoon, choir, and singers. It sounds a bit much but really, it makes for an interesting working day and a decent amount of knitting time. The only problem I have found so far is that my available time to show things here has diminished. It’s not all bad because when I do get the chance to, I have lots to show.

First up, there’s the Multnomah shawl which has been keeping me snug since. 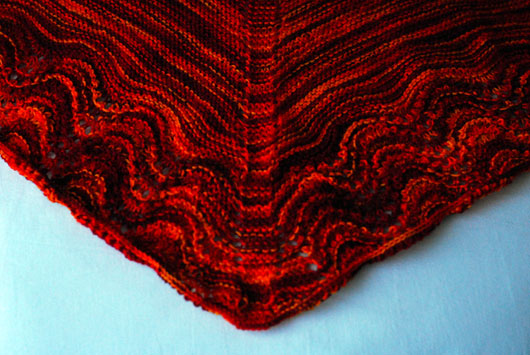 Pattern: Multnomah… there’s a link to the free pattern download on that page somewhere.

Yarn: Wollmeise sock yarn that I got from Clare about a year ago. Yummy!

Modifications: I got a bit carried away with the garter stitch bit at the beginning and ended up with about a hundred extra stitches than I needed – about 350 if I remember correctly. Anyway, I took out the extra stitches at each edge and in the middle as specified in the pattern and then fiddled my numbers a bit to get a stitch count that worked with the stitch pattern. I fudged it a bit but the colours are so busy, you’d never tell. 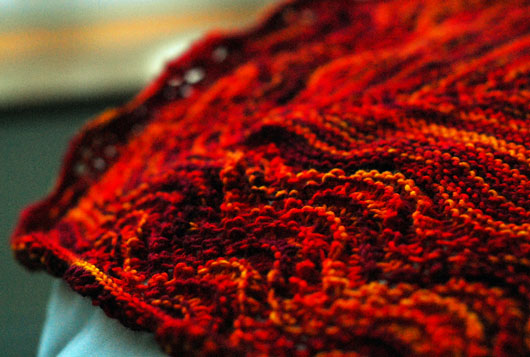 I love how the garter stitch runs right through the border pattern. It really shows off the colours of the yarn without pooling getting in the way. The other thing I love is how the feather-and-fan pattern affects the garter stitch body of the shawl. Kind of like a ripple effect. 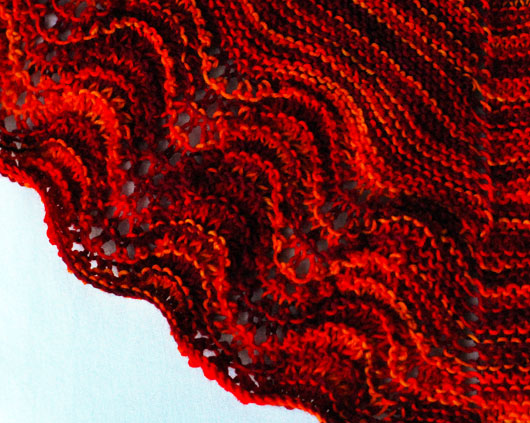 This was perfect mindless knitting and I will probably knit another again some time.

Since I finished that up, I have been working on Liesl. 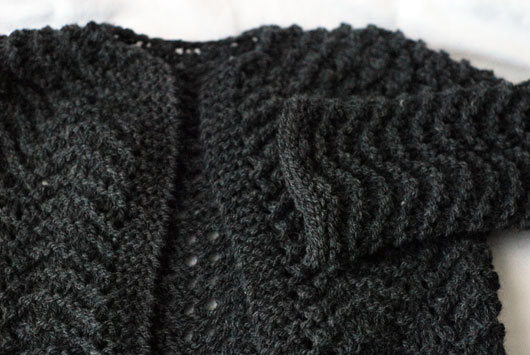 I actually finished it off last night. I knitted the 34″ size because there’s no 36″ size offered in the pattern and most of the notes I read on Ravelry about it said that it stretched out when they blocked it. So, I knitted it about an inch shorter in the body and sleeves in the hope that this does happen. Even if it doesn’t, I have an extra ball of wool left over and it was knit from the top down so I can remedy if I need to.

The only problem with finishing off fun, frivolous knits like those guys is that it’s back to the goat knitting. I am still cranking out that second sleeve. I am seriously beginning to think that the people who wrote about praying for strength and patience were definitely knitters.