Hello! This last week has been a complete blur. I have got the flu, and have been coming down with it all week. I have been very woolly and unfocused in the head, but somehow, somehow! managed to get through the concerto last night. In fact, it actually went really well! But today, I am in bits. I haven’t felt this rotten in a very long time. I slept solid for about three or four hours this afternoon, and I’ll probably go back to bed soon. I don’t even have the energy to knit. I managed two rows on my green cardie. That’s pretty bad! It still looks the same. Anyway, hopefully I will recover during the week and get back to my regular posting. Off to Berlin next Friday! I hope I’m still not sick! 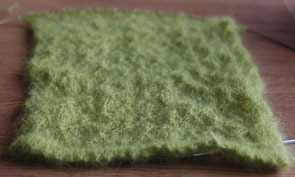 Isn’t it funny how something very fine can work up quicker than something chunkier? I’m definitely experiencing it with ole Granny Smith here. I think it’s partially to do with how much I enjoy looking at the colour, the feel of the yarn and how smooth the Addis are to work with. They don’t cause any hindrance at all, so I am much more tempted to pick it up and work on it for a while (ie six hours straight) 😀 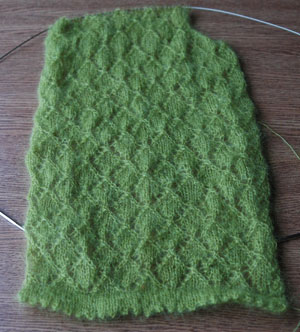 But I am being a good knitter and still plugging away at Bliss. I am almost finished the second sleeve, and then I have to make it up. There is a band that goes around the front and back pieces, quite like the Lucky wrap, only instead of knitting it and then sewing it on, you just pick up the stitches all the way around and knit in garter (I think) for about five rows. So I’m not dreading finishing it, and the weather is still warm enough to wear it.

Either way, it makes for a fun time in town, and yesterday evening, we grabbed a bite and managed to catch the Project 06 parade. The theme was ‘Morning, Noon and Night’ and was excellent, through and through. There were more street performers and less floats than the Macnas Parade, and the performers were, for the most part, very good and interacted well with the crowd. I didn’t have my camera with me as we were going out so no photos I’m afraid! It was good fun and boded well for the night.

We met Dermot’s friend Shane and went to the Róisín Dubh first. This was an old, nook-and-cranny type of gig-pub that was unsuited to crowds, so they have done it up. I have to say I don’t like it very much, but it still seems to be in a temporary state and I would say they will keep the old part of the pub at the front, even though it doesn’t look like it at the moment. Anyway, we moved on to the Blue Note after a while, which was much better. I’d never been there before. We got a snug easily and after a while, a Guinness rep came round and offered us a free round of their new Toucan Brew. She came back after a while and asked us what we thought. Alb had heard only bad things about it, but we all thought it was fine. It’s not as strong as regular Guinness, and there isn’t as strong an aftertaste. It’s much lighter too. Basically, it’s a girly Guinness, but it wasn’t muck. The music in the Blue Note was really great; decent instrumental music that slowly changed from one mood to another seamlessly. When I went to the loo, I heard a woman in another cubicle snoring. Also while in the loo, I heard one Donegal lady telling her other two friends that they looked beautiful. Drunk women are strange and funny.

Everybody was out so the lads got some cans and we walked up Quay street and just stood! It was packed. People to-ing and fro-ing, talking to us randomly. It was good fun. I enjoyed watching people of varying states of drunkeness wobble by. There was a cool breeze off the sea though so we hopped in a cab at about 1230. I discovered when I got home that I’d lost one of my earrings. They are by ‘Meadbh’, handmade bronze enamelled dangly earrings that I bought in the Cat and Moon a few weeks ago. I’d only worn them three times and was really fond of them. Oh well, at least there’s always mohair!

Check out my addis that came in the post today! 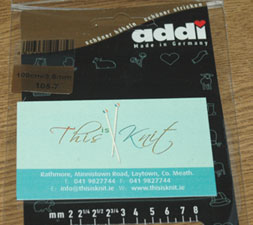 Well, they’re in use at the moment… I have officially kicked off the Granny Smith cardigan in acid green KSH! It involved a provisional, or invisible, cast on. This is the same cast on supposed to be used for the Kiri shawl I made, but instead of learning how to do it properly, I fudged it and got away with it 😛 However, for 106 stitches, I figured this wouldn’t be possible, so I went to the incomparable Knitting Help, watched the video and managed to get it right first time. This is what it looked like.

If you look carefully, you will see how there is a row of K2tog, yo, in the middle. This is the hem of the back. You knit 7 rows st st, then do the row of k2tog, yo, and then 7 more rows st st. You double it up together using a three-needle bind-off and then keep knitting the proper body. The row of k2tog, yo makes a really pretty edging all along the hem. You can see it best in this picture… 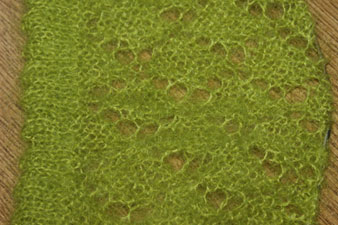 …and the pattern emerging here in this picture…. 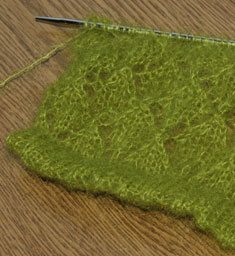 I started knitting the body on my 3.5mm Clover straights that I got in Yarn the weekend before last. I wish I enjoyed knitting on straights more!!! They are such gorgeous, light-weight needles, perfect for working with mohair, but I find straights really unwieldy and dangerous for sitting on (spoken by an experienced needle-sitter-upon). Oh well. They’re good to have in a pinch.

And the addis? Wonderful! I can’t wait to pick up some more (like a few pairs of 2.5mm ones for socks!) in Germany. I got this pair from This is Knit, whose new online shop opened yesterday! Horray! Well done, girls!

As requested… here is an action shot of Salina. I am on my own in the house these days so this was a dodgy tripod shot! 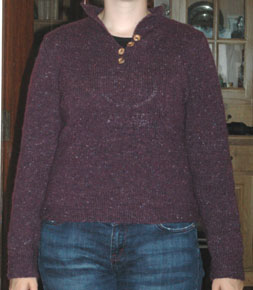 I’m planning on heading down to Galway to soak up the Festival atmosphere tomorrow night, and the certain-to-be fantastic Macnas parade. Photos to follow! I’m also planning on picking up some Opal sock yarn in Yarn to knit those flip-flop socks I was on about 😀

Thank God for the weekend. There are only so many Widows Pension forms I can process….

Here are some snaps from our weekend trip around Ben Bulben. 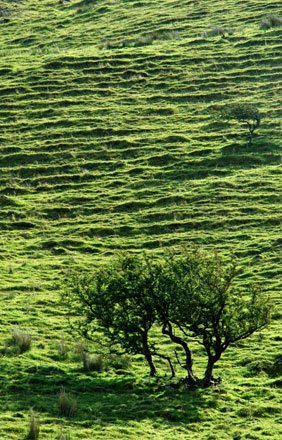 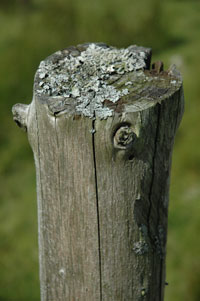 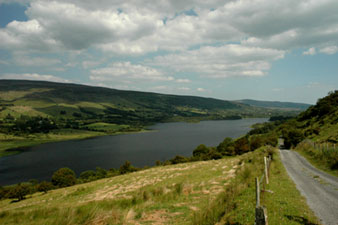 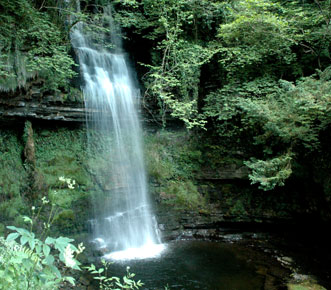 Just my luck – I finished Salina in the middle of a heat wave. (heat wave = 25 degrees :P) 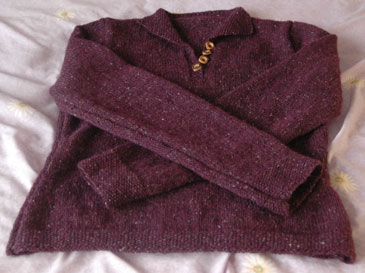 Can I tell how much I love this jumper?! The fit is just fantastic. I am really happy with how the sleeves turned out too – they are just the right length on me. This is the first jumper I have ever knitted where I definitely want to make another one! Check out the buttons I got…

The suit it pretty well, I think.

In other knitting news, I am plugging away at that bloody KWC project, Bliss. I am knitting my first sleeve at the moment. It looks terribly wide… but the shaping for the sleeve cap seems fine. I’m very wary, I have to say. I will be so glad to be finished this attrocity. Between running out of wool and my new wool being a totally different colour (lol), I am still going to finish it and wear the bloody thing.

In otherother knitting news, I purchased my first pair of Addi Turbos from This is Knit yesterday – 3.5mm 100cm circulars for knitting my Granny Smith cardie. I know I got straights for it but I’m just not a fan of straights. Mostly because I end up sitting on them and hurting myself and breaking the needle. You can bundle up circulars into your bag and it doesn’t matter who sits on it. So, they were posted out yesterday and I am excited about getting them. To me, it will be the green light for the green cardie 😀

Had my first rehearsal with the Early Music Ensemble yesterday evening, which was very pleasant. Planning on heading to Galway for the Macnas Parade next weekend. Hopefully the sun will keep with us!

You know what I need? A pair of these. I love wearing sandals but my feet get really cold in our office. (This is purely a Neels phenomenon – I am the only person in our office wearing a zippyuppy top). I am quite fascinated with the concept of buttons on socks, too! Maybe I will knit a pair and put my music note buttons on them 😀

Now, I think it’s time for a Cornetto down by the river and a bit of knitting before… *groan* more widows’ pension forms.