You guys, I made it. My dad’s jumper is done. My mum worked her steam iron magic on it and it is wrapped and under the tree. My mum’s secret jumper – an Elizabeth Zimmermann Ribwarmer – is done, too, and it is wrapped with the rest of her present. 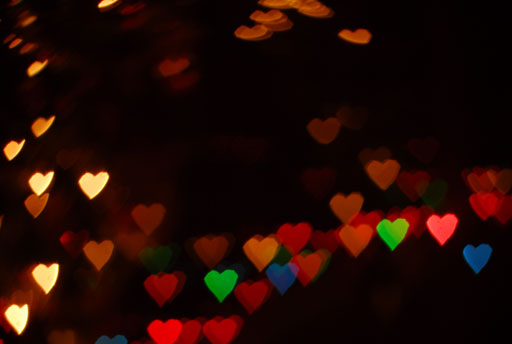 I have experienced the seven circles of stupid with these two projects. The Ribwarmer is wonderfully straight-forward. It is two pieces knit exactly the same in garter stitch. One is reversed and they’re seamed down the centre-back. Easy, right? I knit the neck tab (an extra piece that forms a small collar) on the wrong side on the first piece. I knit the second piece correctly but assumed it was incorrect upon comparison with the first piece. I freaked (this was yesterday). I took a scissors and cut the tab off the second piece, cast off the cut part, picked up stitches, knit the tab on the other side. Went to seam the two pieces up and discovered they were now both wrong. Ripped out newly-knit tab, took out cast off, reknit onto previously cut stitches. Cut other tab off, cast off, picked up, knit new tab.

I knit one sleeve on my dad’s jumper too long. By about four inches. Then, when I was trying to tidy up the collar, where I’d sewed it down, I snipped what I thought was where I’d secured my sewing yarn but what in fact turned out to be the first stitches at the base of the collar which unravelled quicker than I could scream…

I’ll let you dwell on that while I find the link to some finished photos of my shorts – because that’s the most sensible thing to sew on the solstice, right? Here’s the front, the back, how frayed the fabric ended up after much sewing and re-sewing, a pocket. They fit perfectly. In fact, I love them and I cannot wait to wear them. 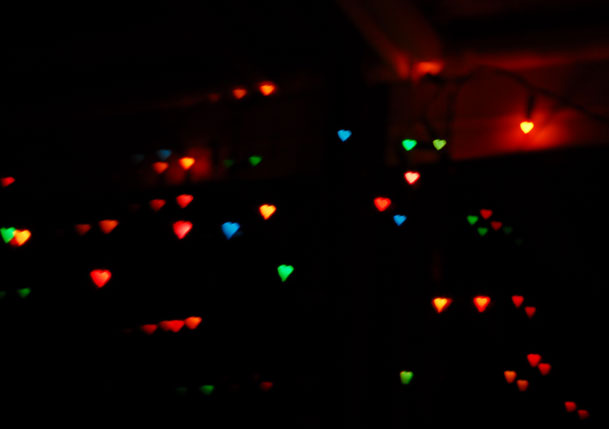 The dress and skirt are both waiting for their linings to be seamed and then they’ll be finished. I saw this idea earlier today and I think I might steal it! The grey dress I am a little disappointed with. It turned out exactly how I pictured it in my head; it just doesn’t look as cute on me as I’d hoped. I’ve had a good run! And it’s not like it’s unwearable… in hindsight, it was probably never going to live up to my hope.

(If you like the photos, check out the tutorial here. It’s very easy.

I can’t seem to stop knitting. I have been a bit under the weather over the last week – I think it’s weather related. Our weather has gone from hot to cold and wet and now back to sunny-but-cool. It has been a bit of a struggle to get back into the swing of practice so it’s nice to have been productive on at least one front.

I finished my Drops alpaca cardigan. This was my world cup knitting and, even though I thought it would be an unachievable goal, I completed it easily. Got the sleeves set in before half time and now all it needs is a good blocking. 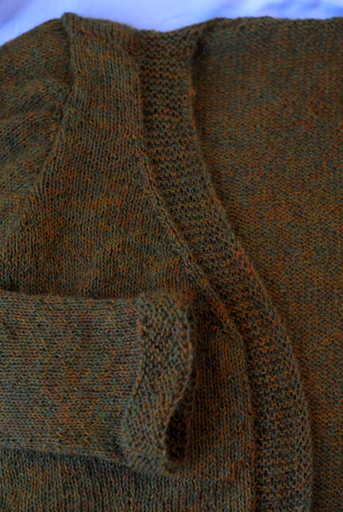 I am still a bit mad about forgetting the buttonholes but the garment fits so nicely and the yarn was so lovely to work with that I can’t really stay mad at it for very long.

I finished up Audrey as well. I was sort of putting off finishing it because I was certain it was going to be too big and floppy. But when I got the button bands and neckband on, I realised that it fit really well. 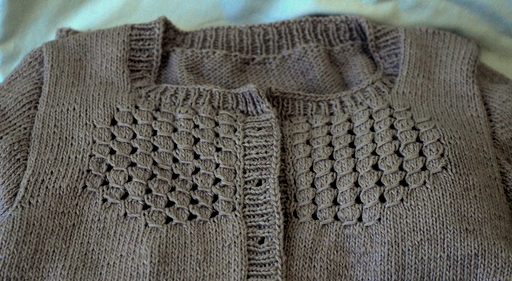 All I need now are buttons. I am thinking about putting a hook and eye at the very top since I forgot to put in a buttonhole. I will post more detailed, modelled shots when these two are blocked and finished completely. I made a few mods in both which I’d like to document for others to use.

I have been trying to work my way through my backlog of almost-FOs. I did finish off the Minimalist cardigan but really, it’s been a disaster from start to finish. It is the most ill-fitting sweater I have made in a long time and even with my mods for the sleeves, they turned out enormous. But you can’t win ’em all so I have put it away in the hopes that someone will appear on my horizon that I can give it to. In the meantime, I have dug out my only other languishing sweater – ole Henley Perfected. 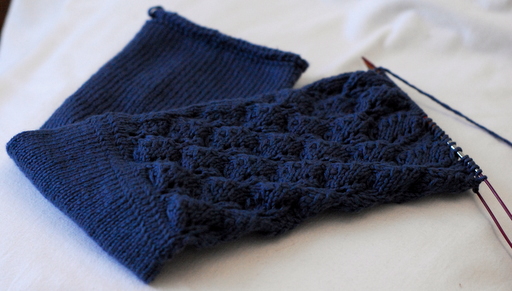 All this needs is a sleeve and a half. It got put away because winter came in rather quickly last year and I wanted to move on to woollier things. The yarn is Calmer a stretchy cotton blend from Rowan. It’s usually quite expensive – about €8 a ball – but I picked up a bag of 10 for about €40 last summer in Galway. It’s a beautiful colour and is really lovely to work with.

But really, my tricot du jour has to be Veera’s new pattern, the 3/4 hap shawl. True, when I saw the pattern the weather had just broken and true, when I cast on, it was pouring rain outside. But now that I have started, wild angry crocheters couldn’t get me to put this down. 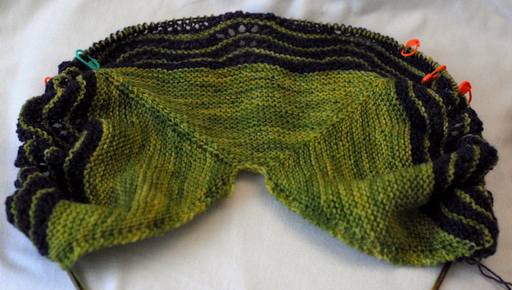 The green is Malabrigo Sock in Lettuce and I bought it originally to join in on the Annis knitalong at This is Knit. I kind of put off casting on because of the huge amount of stitches to start with and the rumours of nupps. In the meantime, this little gem appeared and I knew what I had to do. 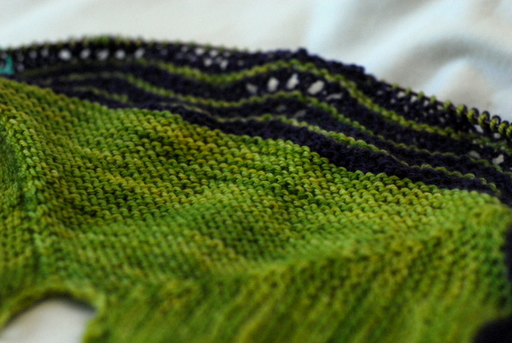 Sleeves and I have a love-hate relationship. I love them because, well, they’re sleeves. They keep me warm. Sometimes they even keep my ears and nose warm if I create inventive sitting positions. I hate them because knitting them is the equivalent of trying to control a violently sprouting weed or possibly even a ravenous herd of goats. On this occasion, it’s the sleeves of my Minimalist Cardigan. The body went swimmingly. I even grafted the front borders at the back of the neck. But the sleeves? The first one was too big. Too big as in the cuff was certainly big enough for the two of us and possibly even Alb, too. A triple teapot cozy. A giraffe scarf. The second one was definitely the right size but – and that’s a noone-to-blame-but-myself-‘but’ – my increases were very odd. The result was a pretty sleeve with a tumor. Not even a tumor you could cover up. It was a very, my goodness, your arm is growing suddenly in a contrary direction type of tumor. I must stress that each of these attempts involved at least ten inches of moss stitch. 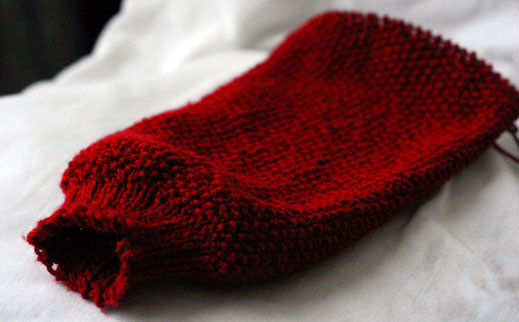 It fits. It is almost the right length. And soon, all I will need to do is make another one…

There have been some distractions, of course. My Fountain Pen Shawl totally ran out of yarn. I ripped out the half border I had knit as well as a repeat of the main chart. I have now reknit half of the border and still… still…. do not have enough to finish. I am going to need to take out another two repeats of the main chart.

Still, when all is said and knit, there is nothing to take the sting out being thwarted at every stitch like the prospect of new projects! Hope springs anew! Check these guys out. First up there’s Liesl, an oldie but a goodie. Then there’s the Vine Yoke cardigan. This free Tokyo tshirt pattern has me very excited! And then there’s Girl Friday, for which I have a gorgeous smooshy sea-blue aran wool. Don’t get me started on Game Knitting! And possibly the best thing since sliced bread – or at the very least, Owls – Get Off My Cloud.

So little time… too… many… sleeves…

Knitting has been going horribly, horribly wrong lately. I finished my green tshirt – the one where I knit the sleeves separately and sewed in the sleeve cap. Disastrous. Unpicked all the sewing and reknit the sleeves. Sewed them back in. Still disastrous. I’m not sure if I should knit the sleeves from the armhole down like I usually do or just set fire to the garment and deny it ever existed.

Then there are the mittens. My beautiful, beautiful mittens. 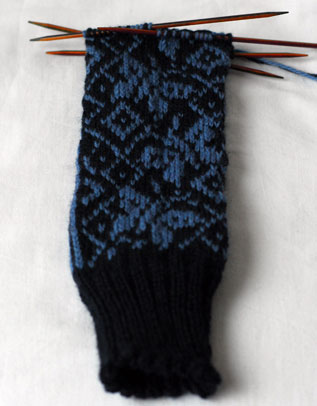 …Which would look fabulous if I had salad tongs for hands. I haven’t even gotten close to the shaping at the tip of the mitten and it is already an inch too long. It is obviously a gauge problem but compounding this problem is the fact that I have mislaid my mitten DPN set.

And then there’s the red Miniamlist Cardigan. Notice anything askew?

Anything like the difference between the right front and the left front maybe? I’m not sure how I could get 25cm into a garment and not notice that the right front was missing 20 stitches – that’s four inches to you and I.

And then there’s Veronique… which looks nothing like the picture. Nothing. It is an unphotographable blob. My mum seemed to be able to mould it into some sort of wearable shape so I’m going to give it one last chance and redo the cast off. If it doesn’t work I am definitely setting fire to it… if only to warn the other knitting. This is getting ridiculous.

Anyway, this (rather large depressing) cloud does have a pink lining in the shape of a Fountain Pen Shawl from Interweave Spring 2009.

The yarn is hot pink Malabrigo Merino Lace that I picked up in Germany. It is the first Malabrigo I have tried and so far, it is doing a good job making up for all that mess above. It is soft, light and airy but still working into a decent fabric on 4mm needles. I think it will go really well with my purple jacket! Sigh.